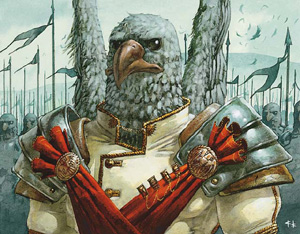 Strategic, perfectionists, flying humanoids known for their tactics and diligence

Tactful and strategic warriors, avians are a race bred to survive. They take roost in tall mountain caves and forests filled with thick trees. With the race in almost constant study, avian cities can exist for years before a neighboring city even knows they are there. 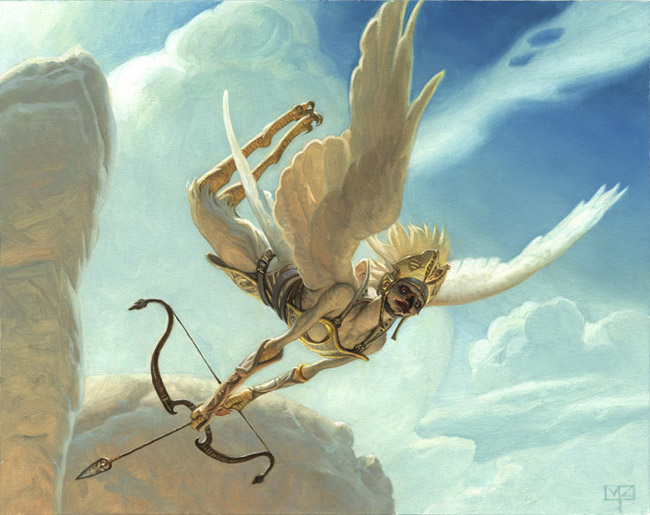 Avians combine the features of human and raptor, having the build of a lanky humanoid but with talon-like feet and a wingspan equal to their height. They come in a variety of colors along the white, brown, and black spectrum, though some younger avians are known to dye their wings in exotic colors. Their heads remain very birdlike, with a sharp beak, piercing eyes, and tufts of feathers that are groomed into different styles. Their feathers cover most of their bodies. Though their feet resemble the tough claws of most birds of prey, their hands retain a more humanoid shape.

Avians are known to dress in light clothing such as cloth and silk. Their colors tend to match their surrounding environment so as to have constant camouflage when necessary. A common tradition among avians is a necklace that carries token feathers, normally no more than three, of significant family members, usually the mother, father, and spouse.

After hatching, avians remain helpless without a parent. They learn to walk around the nesting area around a year of age and are attempting flight by year two. They reach adulthood at about 16 and have lifespans similar to humans.

No matter where their heritage lies, avians are bred to survive. Avians begin lessons and schooling at a very early age and most believe their training never ends. Avians strive for perfection in all things they do, which sometimes makes them hard to work with. They pass this perfectionist attitude onto their fighting styles and arcane training, believing that only a fool rushes into things before preparing for the best possible outcome. 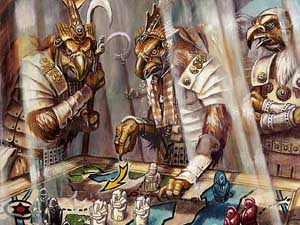 While outside their home cities, avians tend to come off as distant. Social situations don't fit well into their regiment of constant training, and because of this most of the free time they allot themselves is filled with reading or other forms of simple study. Conversations with avians tend to make the other person feel like they are being evaluated, which is sometimes true.

Avians love a challenge, especially one that involves wit or strategy. An easy way to get an avian into a conversation is with a challenge to a strategy game, such as chess. Puzzles and riddles are favored pastime activities for an avian, and they gladly take time out of their studies in order to exercise their strategic expertise.

The avian clergy holds moderate power in their society. Avian clergy tend to practice the teachings of Kord, Ioun or Avandra, blessing the skilled warrior, the talented learner, and the free spirit. Avian roosts dwelling far from other cities are also known to worship primordials. An ancient myth states that avians were crafted by primordials as opposites to angels. It is unknown if there is any truth in the myth, but avian pride keeps it circulating. 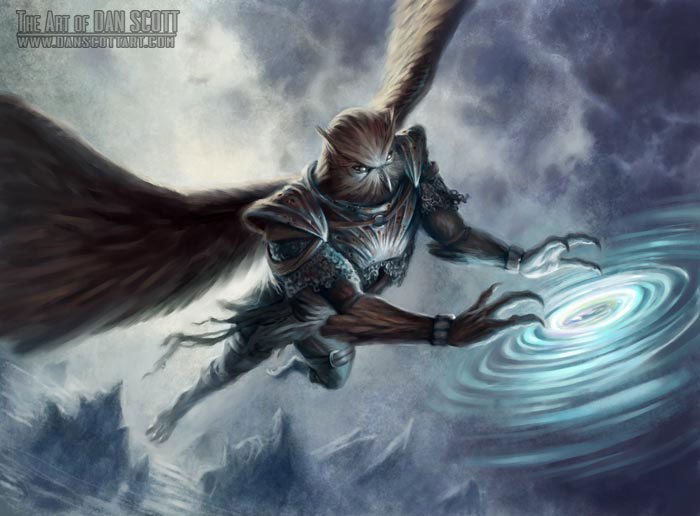 Though they seem anti-social, avians enjoy the company of those they see as useful or entertaining. An avian loves nothing more than learning things from others, and they understand the need to be with others to learn new things. Many avians join adventuring parties in order to gain experiences not found in a book and to train their craft for a more practical purpose. 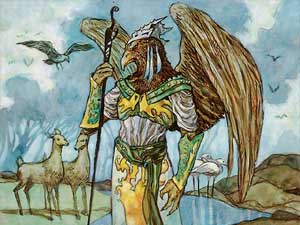 Aleron is an avian swordmage and a member of his adoptive city's mercenary guild. Aleron dyes his wings an indigo color to show membership in the guild. When not performing a job for the guild he can often be found training with the military or deep in study at the arcane library. He does, however, make sure to give himself enough free time to play chess with an old friend in the park.

Raash is an avian warlord, a high ranking general in his clan's cavalry. Though Raash does spend time reading up on tactics and practicing his skills with the glaive, he is a bit of a playboy and can often be found in the company of avian females, trying to add a third token feather to his pendant. But when his clan calls on him, Raash is ready at any moment to lead his men into battle and come out on top.

Risa is an avian warlock and astronomer. Risa believes her powers were gifted to her by the stars and has spent most of her life studying them and improving her powers. Though others call her mad for it, Risa hopes to one day visit the Far Realm in hopes of tapping even further into her power. As it stands now, though, she remains a humble studier of the worlds untouched.

When creating an avian adventurer, here are a few points to consider.