The Southern tip of Loupe is home to the great lands of the Ashen Coast, home to many rare minerals and metals that find their way to the surface through the volcanism that is prevalent amidst the region. So named for the coast as the fires from the earth blacken the grasslands all around, the Coast is rich with nutrients, allowing plantlife and animals, albeit short lived, to flourish. 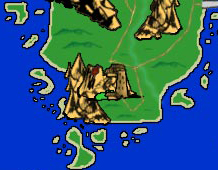 The Ashen Coast is subject to many upper atmospheric conditions, including Hurricanes, which happen every warm season. While Sol shares these rarely, the Ashen Coast always takes the brunt of them, being positioned in the tropics and having no real natural barriers like Sol or Tirasus. Thunderstorms are also common, but wildfires are rare unless volcanic activity in the region is peaking.

Geographically speaking, the Ashen Coast is an odd mixture of hills and grassy plains, with the occasional mountain or volcano. During the more active times of the volcanism in the area, most of the vegetation is charred black. Otherwise, short shrubs or the occasional tree might be present, but rarely does overgrowth ever occur. Lava can sometimes come to the surface, especially if a full scale eruption is occurring. While the Ashen Coast only has two active volcanoes, the whole area is volcanically active because of the two, and signs of past Calderas can be seen if one takes a good look. It makes sense, as well, that occasionally magma can shoot up from beneath the surface, pooling in areas as lava.

Wildlife is less active than in other regions of the plane, considering the hazards posed by living near Volcanoes. That said, you can usually find Wyverns and other reptilian and fire-thriving entities, attracted by the year long heat of the region. The occasional Ankheg or Rock Worm can also be found, burrowing in the dangerous areas of the earth for the wonderfully rich soil's minerals. Fae are a rarity, and nigh never seen in the Coast, given their preference for the wood and dislike toward metals.

The Ashen Coast has always been a precarious place for settlement, given its precarious nature to spew life threatening chunks of molten rock here and there. Its wealth in minerals and rare metals has managed to convince races of every kind to continue to try, however. Unlike most nations, who started out as tribal groups and eventually came together as a nation, the Ashen Coast was so ferocious that it wasn't until an entire cities worth of individuals had already banded together to try and tame the badlands that there was any success in settling the region. This group, out of Tirasus, Sol, and Kerrigan, with some from far away places like Goldengate, rallied around the idea of forever settling the region, and bringing it and its riches under command, and therefore set out. Amidst heavy losses, they finally managed to find a solution by taking the peak of the largest volcano, in the southernmost reaches. Settling on a mountain nearby, they designated their new home as "Skykeep", a name that would one day belong to the greatest city on the earth, in their minds. The elevation protected the city from harm, mostly, and in order to ensure that their neighboring mountain could not endanger them, they began building powerful stone walls, reinforced by magical barriers, to artificially alter the course of an eruption, forcing it out and into the sea towards the west. Often, this would result in tying the nearby island to the mainland.

The original coalition was already made of many different races, including the fabled Dwarves, though these returned home after finding that the underground potential of the region, while rich in metal and mineral, was not sufficient for holding a civilization. Still, most of the Ashen Coast has benefited from this diversity, enticing more and more to come to the Coast seeking their fortune.

As the country was founded in the pursuit of monetary wealth, so has it continued to be a center of economic prosperity, and attracted every kind of merchant imaginable. While fabric is rare in the land, as is cattle and food, the region easily manages by trading metals and minerals with other countries, nearby, thus striking a dependence on economic success in order to continue functioning as a nation. This has led to a Plutocracy, where the most wealthy and most successful moguls and businessmen of the region come together to govern over it, since any one of their fortunes could easily disrupt the way of life throughout the region. All have common interests in continuing the country, which by this time has become an industrial giant compared to the rest of the world, and therefore manage the treasury in an honest effort to benefit the country. It does, however, come at a cost of the jostling and arguing of concerns over each Commerce Lord's (The title with which they are referred to) individual prosperity being threatened by the others proposed legislation.

The government of the Ashen Coast favors economy over all else, and will make decisions based on the expected result regarding economic prosperity, including invasions of other nations.

The Ashen Coast depends on other nations for its own survival, in that it absolutely requires them for food and fabric productions, the primary being the most important. Its own region is poorly capable of producing crops or cattle, due to the region's unique geographical properties. This can usually either lead to two things: War, or trade, though after the failed attempts to invade Tirasus, the country has settled into trading with the nation, as well as with Sol and Kerrigan. Thankfully, it can afford trade above all else, given the wealth of the region, and the highly desirable metals and craftsmanship that is present in the country.

Occasionally, this has caused problems whenever the Ashen Coast has tried to exploit this superiority, or another nation has tried to exploit the dependency of the Coast. Wars have occurred in the past, between Tirasus and Kerrigan, and nearly Sol, though the latter escaped such a expense after the Commerce Lords found that these wars were costly enough, but had little food to sustain them. This makes having allies, and multiples of them, important to the coast, and thereby encourages the Coast to remain an industrial superpower without turning to conquest. That said, the country would likely turn to this if a source of abundant food were discovered in the region.

The Ashen Coast generally mounts Heavy Infantry and Heavy Cavalry, each decked to the top with the highest quality armors it can muster, making them quite the force to be reckoned with. With little wood, however, the Coast has a pitiful navy, and other nations often refuse to send large amounts of wood in order to keep this lacking property, ensuring that the Coast never becomes too powerful.

The Coast recognizes many languages compared to other nations, including rare ones such as Ignan, given the nature of the area around them, and the population of Fire Genasi that have settled there. Also spoken are Common, Giant, and Draconic, allowing dealings to occur with most races.

Major religions are towards Vault, the Pantheon God of Prosperity; Mephistopheles, the Pantheon God of the Pact; And Dices, the Pantheon God of chance. All of these are generally owed to the economically-focused nature of the region, and even the gambles the nation seems to take at times in order to further its capabilities. That said, being inclined to welcome all and to allow for greater amounts of wealth to flow in the city, all deities are generally welcomed, and conflict is usually avoided, as men measure their beliefs alongside wealth. "No blessing from any god is as pleasant as that which you can hold in your hand." as they say.

Cultural values are generally between craft and commerce. To be a good craftsman in Skykeep is to be renowned all over the world, if not all over Loupe, and to be successful is the epitome of the Ashen Coast philosophy.

Located on the southeastern coast, the seat of the Ashen Coast is Skykeep, the City built into the side of a volcano. Over the years, the city has expanded, and begun taking up several mountaintops and mountainsides in the area, including the volcano that was originally settled nearby. Through networks of mason-treated caverns and bridges, the city is truly one with the mountains that it abides by. In order to reach Skykeep, one has to travel to the southern side of the mountain, and travel up a large tower-like structure, leading to the city above.

Skykeep is home to artisans of metalworking, so the craftsmanship here is like no other.

Fireward is a small town located in the central portion of the Coast. It is also where the land begins to dip slightly, making it increasingly likely that lava might fill the basin in more active seasons, as well as flooding may occur. Because of this, from Fireward to Skykeep, a large, steel bridge-like walkway has been built, allowing travelers to pass onward without delay. The town itself is protected by being settled on a large hill, as well as being magically warded to prevent eruptions from occurring.

Near the Entrance to Skykeep is a small cavern network to the west, directly underneath the volcano. While this would seem like a magma-filled deathtrap, it is only half correct to call it such. The actually caverns, while unbearably hot for most races, are filled with Obsidian stone, forming small bridges over gaps, and some safe passage to a degree. In the depths of the caverns, magma is prevalent, and straying off of the paths of Obsidian will often earn you a quick death in the hellfire below. None know what rests at the deepest end of the cavern, though some speculate it may either be artifacts, or a slumbering Aesir.