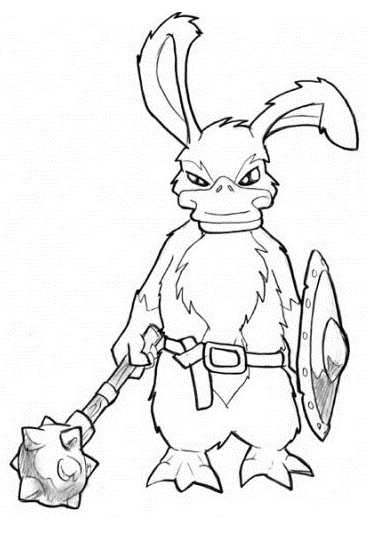 Standing about four feet tall, including the bunny ears, is a short humanoid covered in the grey fur (with a white chest and belly) of a rabbit, but strangely has the bill and webbed feet of a duck. Its hands are like a human's but with the same bare, orange-yellow skin as its feet. It carries a mace in one hand and a round shield in the other, and lowers its head at you threateningly.

Anthropomorphic duckbunnies are abominations twice over. How they came to be is up to you or your DM to figure out, if it really matters. Come on, it's an amalgamation of Bugs Bunny and Daffy Duck who has the spear and magic helmet (or whatever), is that seriously not enough for you?

If there is more than one, they will probably never meet one another, and are such bizarre people that they are regarded as food or freaks no matter where they go. They are usually chaotic, with any flavor of good, evil, or neither on their secondary axis. Regardless of alignment, an anthro duckbunny typically is not a nice person as the only way he can get everyone to stop calling him a fuzzy-wizzy quack-face is by biting their butts until they knock it off, or becoming such a bad mutha adventurer that nobody with an Int above 8 would dare look at him sideways.

Depends on their class, like every other humanoid. This one is a plain old warrior, so he's mechanically indistinguishable from every other 1-racial-HD bloke in the Monster Manual (which is really lame if you think about it), save he can nip you on the butt with a full attack.

Skills: Anthro duckbunnies have a +4 racial bonus to Swim checks so long as their feet are unarmored — they strut their stuff like Morrowind argonians when they care for a dip. Just assume they always take off their boots or lower greaves before swimming.