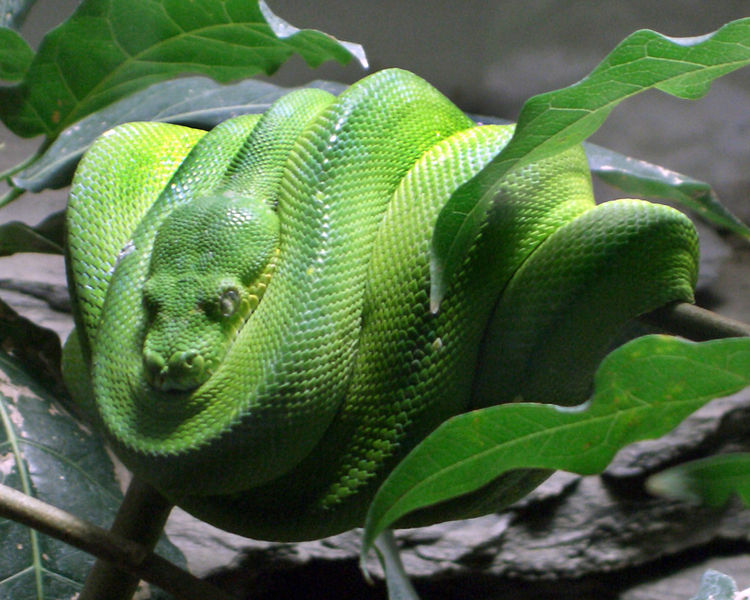 While much of Paludia is dangerous, the majority of species pose little direct threat. This green tree python, for example, is non-venomous and is usually no more than 4 feet long.

Adventurers in Paludia may face obstacles that the adventurer in a typical setting might never face. As a result, it helps to come prepared; forewarned is forearmed!

The DM has discretion in all matters relating to encounters. For the land of Paludia, the notion of random attacks and events is well-placed, as a huge variety of events have a good probability of occurrence at almost any given time. While the final choice is up to the DM, a typical possibility for a random Paludian encounter might look something like this:

Some parts of Paludia are more dangerous than others. For a more difficult quest, the set of encounters looks something like this:

Below is a list of some of the possible encounters in a village when the party meets with the chief:

Lizardfolk villages and towns come in different levels of development. Most are simple at best, but a few have more advanced goods and services available. Note that the development level of the villages and towns is independent of the size of such settlements; a larger settlement can be less developed than a smaller one, even though this isn't very likely. Below is a list of the different structures and locations that are usually available in each level of development:

Primitive: Chief's hut or cave. This settlement has little to no contact with the outside world.

Rudimentary: Chief's hut, shrine. This settlement has minor contact with the outside world.

Basic: Chief's hut, shrine, access to at least one simple craft shop (ex: fletcher, bowyer, etc.) This settlement has some contact with the outside world, but not enough to significantly impact the lives of those who live there.

Developed: Chief's hut, shrine or temple, access to at least two simple craft shops, small market (where goods besides crafts, such as food, can be bought and sold), possibly one inn. This settlement has regular contact with the outside world and merchants come to buy and sell goods. There is a chance that this settlement has an arena.

Advanced: Chief's hut or residence, temple, access to at least three simple craft shops, access to one advanced shops (herbalist, alchemist, etc), average market, no more than one inn. This settlement has major contact with the outside world, and its economy greatly benefits from the influx of merchants and visitors. This settlement also has an arena.

Sophisticated: Chief's residence, at least one temple, access to at least four simple craft shops, access to at least two advanced shops, large market, no more than two inns. This settlement has much contact with the outside world, sees many merchants, and its citizens are impacted by events and ideas from far outside the settlement's borders. This settlement has an arena, and it is likely the largest in many kilometers around.

There is also one town, Lixus, who's level of development is beyond any other in all of Paludia. It exists in its own class, beyond even the Sophisticated level.

Another obstacle to adventurers is language. Lizardfolk speak a dialect of draconic naturally, but the more developed tribes generally speak common as well. Parties who cannot communicate with the lizardfolk are at a distinct disadvantage.

Paludia's environment is hot and wet all year. The rules for marshes and tropical rain forests should be taken into account.

Paludia is a very hot land, so the game rules for heat ought to be taken into account in certain areas at certain times:

A character in very hot conditions (above 90° F) must make a Fortitude saving throw each hour (DC 15, +1 for each previous check) or take 1d4 points of nonlethal damage. Characters wearing heavy clothing or armor of any sort take a -4 penalty on their saves. A character with the Survival skill may receive a bonus on this saving throw and may be able to apply this bonus to other characters as well (see the skill description). Characters reduced to unconsciousness begin taking lethal damage (1d4 points per hour).

In severe heat (above 110° F), a character must make a Fortitude save once every 10 minutes (DC 15, +1 for each previous check) or take 1d4 points of nonlethal damage. Characters wearing heavy clothing or armor of any sort take a -4 penalty on their saves. A character with the Survival skill may receive a bonus on this saving throw and may be able to apply this bonus to other characters as well. Characters reduced to unconsciousness begin taking lethal damage (1d4 points per each 10-minute period).

A character who takes any nonlethal damage from heat exposure now suffers from heatstroke and is fatigued.

These penalties end when the character recovers the nonlethal damage he took from the heat.

Rules for frequent rainstorms ought to be taken into consideration as well.