The abandoned fortress can serve a variety of purposes in a variety of settings: it doesn't necessarily have to be occupied by goblins (undead and wild beasts work just as well), and it can easily be extended (a cellar comes to mind).

In the Years of Gold setting, the fortress represents a hideout of Great Claw goblins somewhere in the lowlands of Hundon. If used in another setting, remember to change the goblin stats to standard D&D stats, since the stats used here are for Pansaerian goblins.

The abandoned fortress doesn't really constitute a dungeon as such, seeing as it contains only three rooms and two fights. Rather, use it as an opportunity for clever tactics: the party is pitted against a large force of enemies in a fortified, trapped position - what will they do?

The Great Claw has swept away almost all civilized settlements in the lowlands, and this fortress is no exception. Perhaps it was a noble's summertime estate, or an attempt to reclaim ground from the wild. In either case, the original inhabitants are dead and the goblins rule supreme. The Great Claw has a hundred locations like it, but reclaiming even one is a step in the right direction.

The quest is all about the puzzle of taking on a fortified position. To achieve this, the party needs to be level 5 or preferably lower, since otherwise a direct approach quickly becomes to easiest solution (then again, a properly min-maxed party will find it so anyway). Make sure the players understand their inferior position, so as not to outright lead them to their deaths. 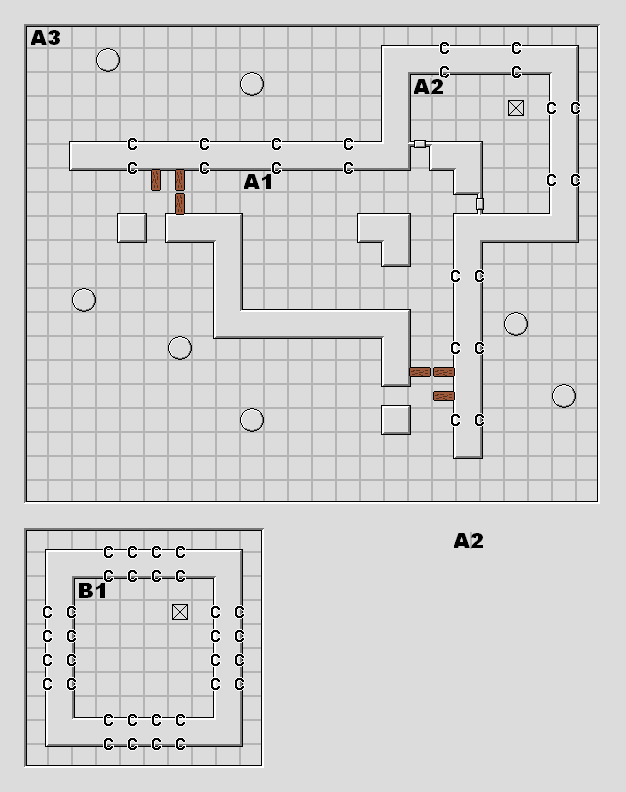 It is up to the players to decide what sort of approach they want to take with the fortress. What follows are a few suggestions as to how to handle some obvious ones. Note that this isn't a list of 'right' answers, and that the DM should discourage any other option - far from it. An invention solution that would logically work (including fantasy logic) is a good solution.

NOTE: Whenever coordinates are present, alphabets are vertical and numbers are horizontal.

Once upon a time this might have been a grand castle, filled with expensive furniture and rich people. But long years and what you guess might have been large humanoids have done a score on the place. The walls are singed with fire and for the most part partly collapsed, with only a few sturdy passageways still standing. The signs of goblin inhabitation are immediately obvious: all manner of filth has gathered into every nook and crevice, with small campfires and poor cots placed haphazardly all over the place. A large wagon has been pushed against one of the walls; what the rotten goods in it used to be, you do not want to know.

Two hallways with a 70ft.-by-40ft. hall, 8ft. high (hallway), 10ft. high (hall). Doors to tower base locked (hardness 5, 10 hp; Open Lock DC 18 to open, Strength DC 15 to burst). Collapsed wall (hall A6-7, hall B7), bladed barricades at end of hallways (hardness 5, 20 hp per square; moving over takes four times normal effort and deals 2d6 damage per square; Climb DC 20 per square, 1d6 damage; Jump DC 20 with running start, have to succeed on a Dexterity/Tumble check against DC 10 to not end up on top of barricade and take 2d6 damage). Four squares in front of both barricades trapped (a vial of acid dropped onto each square, Reflex DC 15 to move 5ft.) A large wagon (eastern hallway) with rotten bread and apples in it, as well as a hidden pouch of fine wines (worth 150 gp; Search DC 25 to locate). A secret treasure stash of the goblins (inner corner of hall; Search DC 30 to locate) with a +1 light mace, a masterwork studded leather armor and a wallet with 200 gp in it. Four arrowslits (marked with C on map; ½ft. wide on the outside, 4ft. wide on the inside; offer near-total cover (+10 AC, +5 Reflex, Improved Evasion)) on the northern wall and three on the eastern wall. Eight goblin warriors and two taskmasters are at location at any given time.

Two of the goblin warriors are armed with morningstars (+3 melee, 1d6+1) and light shields (AC 17, touch 14, flat-footed 14); two are armed with longspears; and four are armed with throwing knives and punching daggers (+3 melee, 1d3+1/×3). They all have nets. The taskmasters lead the goblins in any fight, and it is due to their cleverness that the defense of the fortress is so rigorous. First and foremost, the goblins seek to maintain their positional advantage: they fight off those who try to overcome the barricades using longspears, throwing knives and nets, and react quickly to other entrance attempts (say, descending from the tower). The shielded goblins hold the front line, with the spearmen right behind them. The knife throwers offer supportive fire.

The taskmasters are the commanders of the bunch, and due to their frailty, always stay as far back as possible. They use web to hold down opposition, and when the foe is strained, they synchronize their magic missiles. If there's time to buff their side, several cat's grace spells will improve the speed and defenses of the warrior goblins. Grease and reduce person can help in a pinch.

This room is stuffy and smells unclean, but is at least a little more quiet than the main hall. In one corner, the goblins have gathered a food stockpile of sorts, although to call a pile of improperly-butchered and violated meat a 'stockpile' is rather generous. Sunlight [or moonlight] flows in from the four arrowslits on the moss-covered walls, and in the darkness of the room there's a soft gleam - the padlock of a treasure chest.

30ft.-by-15ft. room with a 15ft.-by-15ft. alcove, 10ft. high. A pile of assorted carcasses (alcove B2-3, alcove C2-3) contaminated with filth fever (Filth fever―contact, Fortitude DC 12, incubation period 1d3 days, damage 1d3 Dex and 1d3 Con). A large trapped treasure chest (A1; Search DC 25 to locate, Disable Device DC 22 to bypass; a cloud of toxic dust, Inhaled, Fortitude DC 15, initial damage 1d4 Dex and blindness for 1 minute, secondary damage 1d4 Dex and blindness for 1 hour). The chest contains 500 gp in assorted coinage, 20 silver arrows, four vials of acid, a buckler and a wand that gives of a faint spark when activated but does nothing else. A ladder to the tower top (B5).

The light forest around the abandoned fortress ruins gives off an eerie feeling, as if you were being watched. Many of the tall elms near the fortress have been cut down, perhaps as a protective measure or just to spite nature. The old stones of the fortress itself still hold a certain feeling of majesty, even though the years have not been kind to them. One of the towers of the fortress still stand, looming above even the tallest trees - all manner of vines and growths cover its sides.

The top part of this tower amazingly still stands, even though some powerful siege weapon has apparently devastated the roof. Discarded weapons, dusty bones and remains of red tiles litter the floor. A huge, dark shadow lies unmoving in the middle of the tower floor - sleeping?

30ft.-by-30ft. tower. A ladder to the tower base (B5). A bloated giant spider seeks to ambush those who approach, using the thick webs it has strewn to the sides of the tower to catch assailants like so many flies.

The spider has webs strewn on the entrances to the tower (Spot DC 20 to notice, Escape Artist DC 16 to escape, Strength DC 20 to burst; 5ft. section: 14 hp, DR 5/―) and attacks those who get stuck mercilessly. It pins down foes who avoid the web with its massive size, biting them again and again to deliver massive amounts of its poison. Escape is possible, but if the spider considers the odds to be in its favor, it fights to the end.