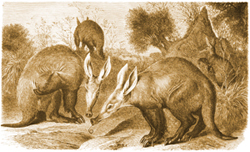 Aardvarks, also known as ‘ant-bears’ and ‘earth pigs’, are odd mammals with tubular snouts and donkey-like ears. They are mostly nocturnal creatures and prefer to sleep during the daylight hours, emerging at nightfall to tunnel into termite mounds in search of prey.

Aardvarks usually attempt to flee from potential threats by tunneling rapidly underground. If unable to escape, the aardvark falls onto its back so it can scratch and kick its attacker with all four of its feet.

An aardvark familiar grants its master +2 bonus to Listen checks.