A Player's Guide to Roles in the Party (3.5e Optimized Character Build) 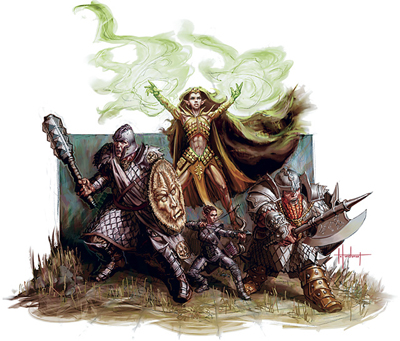 Every character and their own role

Sometimes, people can be confused about the different roles in D&D. They don't know what their place is, or think that the only way to be effective in combat is to kill the enemies as quickly as possible with no thought to depending on other characters or to cast spells that increase the combat effectiveness of their allies. To differentiate between these and help people who don't quite understand what the different roles are, I decided to write this article. Below I will examine the three main archetypes of roles in a party, as well as the major variations of each one.

The protectors and zone controllers, Defenders are the solid backbone of the party. With enough defence of some sort to not be hit, these interpose themselves between their squishier allies and enemies who might threaten them. With enough damage to make sure that enemies don't simply disregard them, these characters control enemies across the battlefield, making sure that they don't attack those who would not be able to stand against their assault. One example of this would be a wielder of the Spiked Chain with Combat Reflexes and Improved Trip. With their range and power, they make any foe wary of their might, and foes who foolishly disregard them find themselves prone on the ground, incapacitated and awaiting an attack by those who are adjacent to them should they rise.

With a massive Grapple bonus, these neutralize one foe at a time, making them nearly helpless and vulnerable to the Sneak Attacks and Sudden Strikes of allied rogues and ninjas. The Psychic Warrior (Expansion, Grip of Iron) or Grapplemancer is a good example of this. Grapplers stop being effective against monsters that have access to Freedom of Movement.

With a big threat range, the zone controller has a zone in which he has almost complete control over the movement of his enemies. Usually with a spiked chain or reach weapon, many of these trip foes who provoke AoOs, causing them to trip and fall in their tracks. A Knight (PHB2) with his Bulwark of Defense ability, Improved Trip, Combat Reflexes and a Spiked Chain is a good example. Zone controllers stop being effective when enemies stop caring about their position or gain the ability to teleport at will (though often this takes up an enemy's standard action, which can be good enough all by itself).

This is the miscellaneous group, ranging from people who provoke AoOs of multiple enemy so that their friends can move without feeling threatened, to the self-buffer who boosts his combat prowess enough to make himself a threat and make enemies want to beat on him while still having a high enough armor to take hits. A Cleric is a good example of this archetype. The important thing is you need to make enemies care enough about you to target you and not your friends (a concept that the Knight (PHB2) is built around, for example).

The swordarm of the party, Strikers make sure that enemies who they attack go down--and stay down. Doing immense amounts of damage in the shortest amount of time, these incapacitate their enemies in little to no time, bringing them down and cutting them off quickly, making sure they can't take another step before dying. One example of this is the Two-Weapon Fighting Rogue who flanks with an ally to hit as many times as possible with their Sneak Attacks, dealing immense amount of damage. Another example would be the Warmage, who trades power for the defense of fighting from afar, the versatility to use different types of energy against their foes on the fly, and the ability to target multiple foes at a time.

The most effective type of striker, glass cannons trade almost all their defensive capabilities for attack power. The best example is probably a rogue with Two-Weapon Fighting who adds his sneak attack damage on every attack he makes, leading to an average damage of over 80 every round at level 9, bringing with it the ability to kill most equal-CR monsters within 1-2 rounds.

These are more mobile. With the mobility needed to move around a foe's defenses and get to their vulnerable underbelly, skirmishers place themselves where the enemy doesn't want them to be and wreaks havoc there. Swordsages (ToB) are good examples of these with their mobility maneuvers that get them fast from place to place.

These are the shock troopers of D&D, running in fast and hard, knocking down and killing foes in mere moments, all the while having enough HP that they don't go down after a round of attacks from the enemy. A good example of this is a straight Barbarian with Shock Trooper (CW) and Combat Brute (CW).

Also the snipers of D&D, these take shot after shot from afar, usually trading damage for the safety of being out of arm's reach of enemies. One example is a Scout (CV) / Ranger with Swift Hunter (CS). Another example that fits into its own category is the Warlock, who trades even more damage for the ability to use massive debuffs against enemies at the same time, and a number of invocations that are truly devastating.

These trade the ability to use their damaging abilities all day for a variety of spells and effects that deal damage. From using Magic Missile to deal with Incorporeal foes to Fireball which will take care of bunched up enemies, these are the ones you want to go to when you need an artillery cannon. Warmages (CA) probably make the best blasters, being able to choose what spell they'd like to use from their list on the fly, while being able to cast in Mithral Fullplate if they take the Battle Caster (CA) feat.

The swiss army knives of the party, Arcanists buff allies, debuff foes, remove foes (temporarily or permanently) from the battlefield, summon more allies to take the brunt of the damage, and are the general utility of the party. Charming people through magic, slowing down enemies, enlarging allies, and so on are all works of the Arcanist, and they make sure that when the party faces flying enemies, their allies have the ability to meet those enemies on even ground. An example of the Arcanist is the Wizard, keeping rows upon rows of scrolls in a scrollcase for whatever situation might occur. Since so many Arcanists do all of these at the same time, I'll simply list a few different categories their spells can go into, and a few examples for each one.

I did not add a "Healer" type archetype because in general, healing HP is subpar in combat except at level 1 when a Cure Light Wounds spell can bring a person back to full HP and when characters get the Heal and Mass Heal spells. Apart from these, it's usually the job of the arcanist to Dispel negative effects that affect their allies, which usually suffices most of the time. Usually removing an enemy from the battlefield "heals" more damage in the long run than healing a friend does in the middle of combat. This does not mean that healing is worthless, and never has a place in combat; however, the majority of healing should take place out of combat using a wand of Cure Light Wounds or Lesser Vigor.

For more info on healing, read A Player's Guide to Healing (And, why you will be Just Fine without a Cleric to heal).

Examples of Classes on this Wiki that Exemplify certain Roles[edit]