In a long-forgotten age in the realm of Triskeli, a Minotaur king was exiled from the ice-wastes north of The Frozen Ocean. The reasons for this exile are known to none. What is known, however, is that the Minotaur king traveled south to the desert-plains of El in the region of Naruanu where he came upon the various warring Naru tribes in a state of complete disarray. Ever the opportunist, the Minotaur king gathered a small group of adherents by shows of great might and conquered the embattled forces—uniting them into a peaceful society by way of force. Through this action the Minotaur king gained the admiration, and even the eventual worship, of the Naru of El. Unable to pronounce the king's native Minotauren name—Aarltu Ur—the Naru began to call him A'ahto-El, meaning "Lord Aarltu" in Naruanuil. 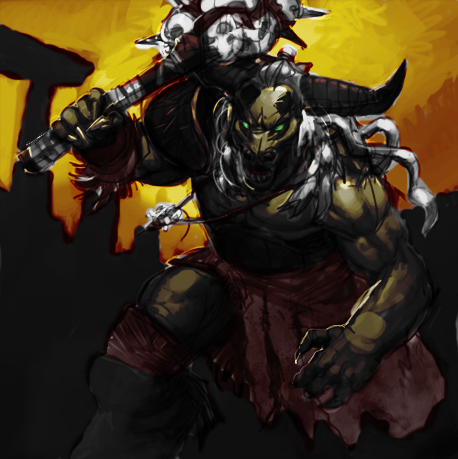 A'ahto-El demands strength, honor, and courage from his adherents—and blood from his enemies.

The Twice-Horned Lord has no formal clergy or established temples. Followers of A'ahto-El use the actions of their daily lives as fealty.

The closest thing to a temple or holy site in the Conqueror's honor would be his labyrinthine palace across the Kosh Ak'Mohr Tributary, the Weard.