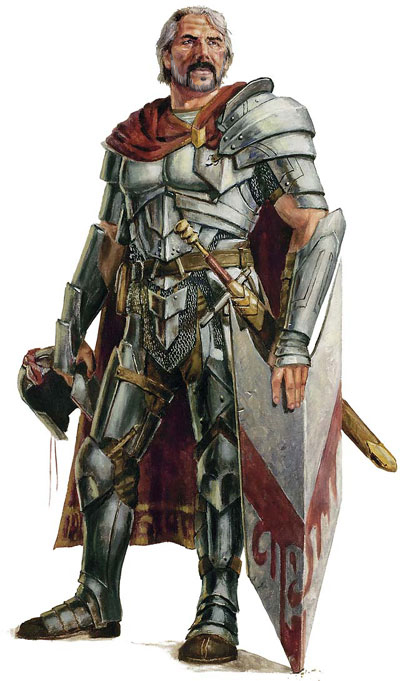 As a Warlord, your highest skills should be Strength and Charisma, followed by Constitution.

As a Warlord you gain the following class features.

As a bonus action, you speak or signal to your allies a weak point on a certain target. This adds a bonus of 2 to all attack rolls made by your allies, against the target. You can change the target of your mark by simply spending a bonus action to mark another target, however, you can mark only one target at a time.

At 1st level, any ally within 30 ft. of you gain an advantage on saving throws against being frightened.

You started adopting at a young age in a specific style of combat. Choose one of the following options. You can't take a Fighting Style option more then once, even if you later get to choose again.

You gain a +2 bonus to attack rolls you make with ranged weapons.

While you are wearing armour, you gain +1 bonus to AC.

When a creature you can see attacks a target other than you that is within 5 feet of you, you can use your reaction to impose disadvantage on the attack roll. You must be wielding a shield.

When you reach 2nd level, you can cast warlord (bard) spells.

You prepare the list of warlord spells that are available for you to cast, choosing from the warlord (bard) spell-list. When you do so, choose a number of Warlord (bard) spells equal to your Intelligence modifier + half your Warlord level, rounded down (minimum of one spell). The spells must be of a level for which you have spell slots.

Spellcasting Focus. You can use your speeches or a musical instrument as your spellcasting focus for your Warlord spells.

At 3rd level, you choose an archetype that emulates your leadership style. Your style grants a feature at 3rd level, and again at 6th, 10th, and 18th levels. Choose 1 from the following: Icon of Victory, Guerrilla Commando, Bravura Chieftain, White Raven Warblade, Fated King, or Bael Turathi Champion.

Through training at 5th level, you now have the ability to attack twice per full action.

When you reach 7th level, you can spend 1 minute watching your enemy in or out of combat. Doing so gives you information about their abilities. The DM can then tell you if the following enemy abilities are your equal to, stronger, or weaker than your own:

At 11th level, as a reaction, you can use this feature to provide one of the following effects. You may only use this once per short or a long rest.

At 16th level, you may use this feature twice before completing a short or a long rest.

At 13th level, you may use your bonus action to command an ally to make a single attack against a creature you've attacked this round and that an ally can move up to 10 feet before making the attack.

At 20th level, you gain an extra action and bonus action.

At 3rd level, when an ally within 5ft of you is the target of an attack, you may use your reaction to change the target of the attack to yourself.

At 6th level, if the attack from 'White Knight' hits you, you gain temporary hit points equal to your Charisma modifier.

At 10th level, when an ally within 30ft of you is reduced to 0 hit points and not killed outright, you can spend your reaction to allow that ally to drop to 1 hit point instead. Once you use this feature, you must take a short or long rest before you can use it again.

At 18th level, all allies within 30ft of you gain a +2 bonus to AC and saving throws.

At 3rd level, you and your allies gain a +2 bonus to damage rolls against creatures that haven't acted in the encounter yet. In addition, when you roll initiative, enemies have disadvantage on attacks of opportunity against you and your allies until the end of your next turn.

At 6th level, when you hit a creature with an attack, one ally who can see and hear you can move up to 10 feet. This movement doesn't provoke attacks of opportunity.

At 10th level, when an ally hits a creature that has not yet acted in the encounter, you can spend your reaction to make a single weapon attack against that creature. If you hit, all attacks made against that creature until the end of the triggering ally's next turn deal 1d6 extra damage.

At 18th level, when you use your Commanding Presence on an ally, that ally deals 1d8 extra damage on the granted attack.

At 3rd level, While you are not wearing any armour, your Armour Class equals 10 + your Dexterity modifier + your Constitution modifier. You can use a shield and still gain this benefit.

At 6th level, if an ally attacks the target of your commanding mark with a melee attack, it must become reckless and is taken with advantage, however, all attacks against that ally have advantage as well until the beginning of that allies next turn.

At 10th level, when you roll initiative, every ally that can hear you gain advantage on all strength checks and strength saving throws for 1 minute. All creatures within 100ft can hear this.

At 3rd level, when you hit an enemy with an attack, all allies that hit the target deal extra damage equal to half your proficiency bonus until the start of your next turn.

At 6th level, you have advantage on Wisdom (Perception) checks that rely on hearing or smell.

At 10th level, all allies have advantage on attack rolls against a creature if the warlord isn't incapacitated and is within 5 ft of both the creature and the ally.

At 18th level, as a bonus action, you may grant an ally an action. Once you use this feature, you must take a short or long rest before you can use it again.

At 3rd level, space within 5 feet of you becomes 'my land' and is difficult terrain for enemies.

At 3rd level, you are fated to rule a realm. Work with your DM to decide which realm you are destined to rule. You are nowhere near ruling your realm yet, but even now the fates are working on your destiny. People in your realm are predisposed to like you. NPCs in your realm are more likely to be friendly towards you and your allies.

At 6th level, you can spend your action to command a creature within 'my land' that can understand you to do your bidding. It must succeed a Charisma saving throw with a DC equal to your spell save DC, or it will do as you command for 1 turn. If it is friendly to you it has disadvantage on the saving throw. You can specify a simple and general course of action, such as "Attack that creature", "Run over there", or "Fetch that object". The creature cannot be made to harm itself but it can harm its allies. Enemies that are immune to being charmed are immune to this feature. Once a creature succeeds on this saving throw, it can't be affected again for 24 hours. This ability can only be used once per long rest.

In addition, the aura of difficult terrain created by your This Land is My Land feature increases to 10 feet.

At 6th level, news of your exploits seems to reach and spread around your realm supernaturally fast. Most people in your realm are aware of who you are and what you've accomplished.

At 10th level, you can spend an action for force any creatures in 'my land' to make a Charisma saving throw with a DC equal to your spell save DC, or fall prone. Creatures that are immune to being charmed are immune to this effect. Once a creature succeeds on this saving throw, it can't be affected again for 24 hours. Once you use this feature, you must complete a long rest before you can use it again.

In addition, the aura of difficult terrain created by your This Land is My Land feature increases to 20 feet.

At 18th level, all allies within 'my land' gain 15ft of movement per turn.

In addition, the aura of difficult terrain created by This is My Land feature increases to 60 feet.

At 3rd level, you know the following spells, including cantrips. You may only cast them if you have the spell slots required, as shown above. To cast one of your spells, you must expend a slot of the spell's level or higher. You regain all expended spell slots when you finish a long rest.

At 6th level, you and your allies within 30ft of you gain resistance to fire damage.

At 10th level, any allied non-magical attack, of your choosing, including your own, deals fire damage instead.

At 18th level, when you or an ally deals fire damage, it deals a bonus 1d6 fire damage.

At 3rd level, the number of spells you know increases to your intelligence modifier + your warlord level (minimum of one spell). The spells must be of a level for which you have spell slots.

At 10th level, you no longer need to spend a minute when using study your enemy.

Additionally, you gain proficiency in history, investigation and insight checks. If you are already proficient in any of these you gain advantage as well.

At 18th level, add your intelligence modifier to your Armour Class and Initiative.

At 3rd level, your commanding mark no longer affects allies but instead applies to you.

Additionally, your call of courage provides immunity to fear, but no longer applies to allies.

At 6th level, it no longer costs a bonus action to use commanding mark and the bonus it gives is increased to 4.

At 10th level, your inspiring attack now applies to yourself instead of your allies.

When you reach 11th level, your heroic resolve feature applies to yourself instead of your allies.

When you reach 13th level, your great leader feature applies to yourself instead of your allies.

At 18th level, any creature of your choosing within 30ft must pass a charisma saving throw with a DC equal to 8 + your Charisma modifier + your proficiency bonus. On a failure, the creature becomes frightened of your for the next day. On a success, it is immune to being frightened of you for one day

Prerequisites. To qualify for multiclassing into the Warlord class, you must meet these prerequisites: Strength 13 and Intelligence 13

Proficiencies. When you multiclass into the Warlord class, you gain the following proficiencies: Light and medium armour, shields, simple and martial weapons