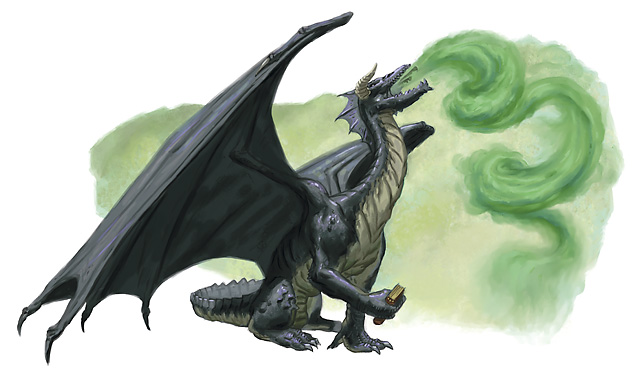 King Uron Delpear is the King of Ghikva and the Allied Lands also known as Ghikva.

The King of The Kingdom of Ghikva, as well as the King of the Allied Lands of Ghikva, is the Great Uron Delpear the Third, called by his people Uron the Black. He is the third of his dynasty, and like his fathers, a black dragon.

His son Drubai leads a secretive society in the Frell Mountain Range and is bent on overthrowing his father. Drubai, along with friend and heir to the throne of Malsvir Prince Thraun, have a warlike ideology and a new vision for the future of Valgora. However, the common Ghikvan only knows that Drubai is not seen much these days.

Water Breathing (Ex): King Delpear can breathe underwater indefinitely and can freely use his breath weapon, spells, and other abilities while submerged.

Corrupt Water (Sp): Once per day King Delpear can stagnate 10 cubic feet of water, making it become still, foul, and unable to support animal life. The ability spoils liquids containing water. Magic items (such as potions) and items in a creature’s possession must succeed on a Will save (DC equal to that of King Delpear’s frightful presence) or become fouled. This ability is the equivalent of a 1st-level spell. Its range is equal to that of the dragon’s frightful presence.

Charm Reptiles (Sp): King Delpear can use this ability three times per day. It works as a mass charm spell that affects only reptilian animals. King Delpear can communicate with any charmed reptiles as though casting a speak with animals spell. This ability is the equivalent of a 1st-level spell.