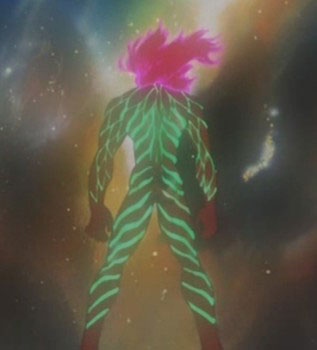 Atomsk, also known as the "Pirate God" and "The Star Thief", is an enigmatic character. His thieving abilities are great enough to steal entire solar systems and rumored to have stolen a plane of existence from another diety. It is unknown what he truly looks like but he, if Atomsk is even a he, does have a few favourite forms while plane hopping. Two of his physical appearances when in other planes is that of a bird-like creature resembling a phoenix and another taking the shape of a male with maroon flaming hair and green swirls covering his body aside from his hands and feet. He has an emerald green nose ring looking like a chain link in all of his forms.

Atomsk used to be the self-appointed court jester of The Lady, but to The Lady he was more of an annoyance and a pain the longer he stayed around, even though he had just as much of a passion, maybe even more so, for games of chance (namely anything that was boasted as being unstealable) even if they were rigged or if others were cheating against him. It is rumored that The Lady challenged him to steal a plane of existence from another diety and give it to her, he moved the plane of existence out from under the other diety and give it to The Lady but he found out that she was using him for her own plans to get rid of a Deity who was a threat to her. Atomsk got angry that he was tricked himself. It is unknown what Atomsk did with the other plane of existence but he did unknown horrors to The Lady which quickly angered her and as for revenge she destroyed all of the current temples and clergy that followed Atomsk as well as tried to hunt him down. Atomsk quickly went into hiding and even with The Lady's powers she still can not find him to this day.

If it isn't nailed down and you can steal it with no one being the wiser, it was yours all along. If it is nailed down, rip it off and steal the nails too. This isn't to say steal everything you can, but to be careful what you steal and how you steal it. Life is a game and rules are meant to be changed. Atomsk is a chaotic Deity who enjoys creativity in a thief's work. Reverse pickpocketing, acting like Robin Hood, stealing from the poor giving to the rich, breaking into someone's house and replacing everything inside with the next door neighbor's furniture are great laughs and highly amusing not only in the act itself but watching the total chaos that follows from doing so.