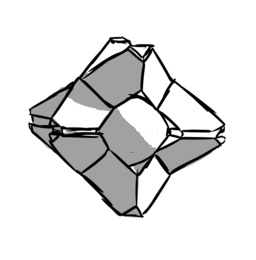 This small sentient stone is housed in an elaborate metal shell. Lightning crackles between the points of this shell. It will only attune to someone who is making death saving throws. It cannot be targeted by normal attacks, but can be hit by AOE effects. It has advantage on Dexterity and Intelligence saving throws. Once attuned, it is capable of operating on its own for short periods of time, but will actively resist this. The storm stone can speak to their wielder, encouraging them to perform good deeds, and trying to inform them about situations. It can make History and Investigation checks at advantage. Pocket Plane The storm stone has a tiny pocket dimension, similar to a bag of holding. It can hold up to 150 pounds of items there and retrieve them at will. It can also escape here as a reaction or bonus action if targeted by an attack. Rough Translation The storm stone can make a DC 15 History check to read a written language that is unknown. However, it may not give the exact or correct meaning. Revival If an attuned individual reaches 0 hit points, the storm stone will try to revive them. During this turn, it becomes vulnerable to attack, and if it is destroyed, the owner instantly dies. If the Storm Stone completes its task, the player revives at full hit points. Storm Stone Lightning Once per long rest, it gives you the ability to make a concentration attack using lightning, that lasts for a maximum of two turns. You rise into the air, with lightning lashing out from your hands. This deals dependent on your level, shown in the table below.

Sentience. The storm stone is a sentient good item with an AC of 20, hp (15) 2d10 + 4, speed is 30 feet, Strength score of 4, Dexterity score of 22, Constitution score of 10, Intelligence score of 18, Wisdom score of 14, Charisma score of 10, passive Perception 12, languages are Common, Elvish, Dwarvish. worth 2000 xp.
Personality. the storm stone is a neutral good entity, always helpful and cheerful. it tends to ignore dangers, both to itself and it's wielder.