The cunning of humans, the power of beasts, and the industry of bees. Slivers are versatile when alone, and unstoppable when together. 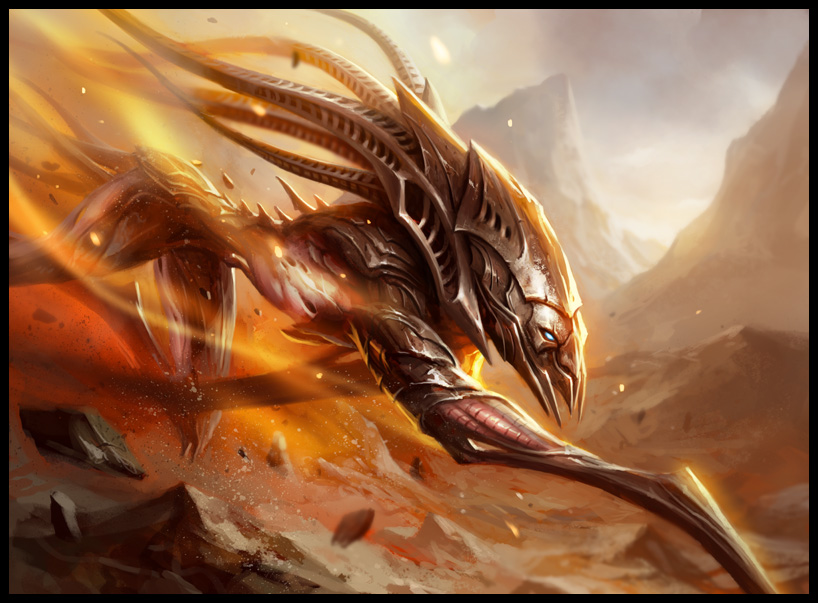 An example of the Slivers' snake-like ancestors

The Slivers of Faerûn have adopted a humanoid appearance. Their skin can take on almost any shade of color imaginable, though grays, greens, and pale blues are most common.

Slivers appeared on Faerûn many millennia ago, arriving via interplanar travel. When the Slivers first arrived they were snake-like in appearance, and lacking in civility. The wild ones died quickly in skirmishes with other races; they attacked settlements, villages, and cities until they were eradicated. Those that practiced restraint, or otherwise were secluded from civilization, quickly evolved as Slivers are wont to do. Now Slivers are a sophisticated race, capable of integrating and co-existing with other races.

Slivers have tried to move away from a hive-minded colony towards a more individual lifestyle. While all Slivers strive to express themselves and act independently, the old ways of the hive still hold sway over their actions. As a whole, Sliver society is about the greater good; individualism is only encouraged because it is necessary for society to function. Citizens of a Sliver city (or hive) are expected to make careers out of improving the hive, whether through trade, farming, artisanship, or the most highly respected trade of them all: infrastructure. Sliver society adores their architects, as they are the ones solely responsible for the physical design, improvement, and maintenance of the hive.

Such a close-knit and socialist society can breed much prejudice for the other races. It's not uncommon for Slivers to hold a casual disdain for non-Sliver races, although there are just as many that hold respect for others as well; a good hive needs good trade after all, as no one hive can provide everything for it's denizens.

Slivers' names are often hard consonants and clicks, however Sliver ambassadors often take up names reminiscent of the culture they are living in.

Slivers can have a variety of talents, but are weak when alone.
Ability Score Increase. +1 to one ability of your choice.
Age. Slivers reach physical maturity at 3, but aren't regarded as adults until 18. Slivers age until they are about 50, at which point they cease aging altogether. Slivers have biological immortality, and will live on indefinitely.
Alignment. Slivers tend towards Good, wanting their hive and the civilizations it is connected with to prosper. They are almost always either Lawful or Chaotic, either upholding the idea of the hive or opposing it, and are rarely Neutral in this regard.
Size. Slivers range from 5 to over 7 feet tall. Your size is medium.
Speed. Your base walking speed is 30 feet.

Sliver Body. Your Sliver biology is a relic of the past, providing you with a small boon that is reminiscent of your untamed ancestors. Choose one of the following:

Sliver Mind. Your Sliver heritage gives you the ability to interact with other Slivers in many ways.

Darkvision. Adapted to living in the dark corridors and winding passages of your hive, you have the ability to see in the dark. You can see in dim light within 60ft of you as if it were bright light, and in darkness as if it were dim light. You can't discern colors in darkness only shades of gray.
Languages. You can speak, read, and write Common and speak Sliver. Sliver is a language filled with clicks, whistles, and harsh syllables.