Design Note: This race first appeared in the Official D&D Supplement in the Gazetteer 10, GAZ 10 in 1989 by Bruce Heard and is adapted to fit 5e. 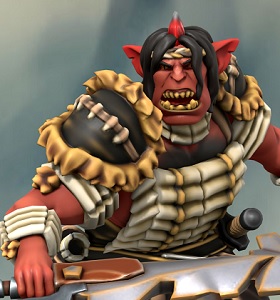 Red Orcs are discernable from their obviously red skin, and terrible angry tempers.. With simian monkey-like or ape-like faces, instead of the normal faces of their greener cousins.

Red Orcs have been around for longer than can be remembered.. usually used as elite troops by their greener cousins. The race was born out of experiments of demonic or fiendish origin, . Their blood tainted with fiendish or demonic energy in some ancient epoch. Due to their ape and monkey like faces, scientist wizards believe that Bar-Iguras were mixed with Common Orcs, to form an elite fighting force that the arch-demons could use to invade other planes and worlds. The Red Orcs created their own brutal societies by being shunned and exiled, being the pariahs that they were, due to their excessive aggression and intimidation. They were forced to live outside of the common Orc realms. In the millennias that have passed three distinct species of Red Orc has emerged according to scientist wizards that have observed the species through use of invisibility spells. Orcus Rubeous Vulgaris, Orcus Simius Terribilis, and the Red Orc Peon. The Terribilis being the dominant species of Red Orc. All three species can live within the same horde at any given time, and the wizards believe at some point they will assimilate and become one distinct species. The very aggressive behavior of the Terribilis has, so far, kept the species from assimilating into a homogenous breed.

Red Orcs live in badlands and arid places, feeding off cacti, other arid plants, and whatever they can hunt, be it animals. bugs, or other humanoids. Some of the smaller Red Orcs are ranchers and keep livestock that are able to survive in the arid environments. The smaller orcs(called peons) are bullied by the more powerful orcs and are good at stealth, and cowering to cope with the brutality. These peons are not able to be very aggressive, but instead can do the opposite at times. Clans, Tribes, and Hordes are always ruled by one chief that is the most muscular and powerful. A chief can be challenged by any Red Orc in a fight to the death in single combat. Cunning and spellcasting is frowned upon in these societies, although there is always at least one shaman and one apprentice. These shamans are of the lower peon class, and cannot normally rise to chiefdom, unless they somehow grab power from the tribal chief. Those peons that are experts in cunning, tend to be the scouts sent out to find new raiding opportunities or military intelligence and tend toward ranger-like classes, although thievery is not unheard of in the tribal system, if a peon is caught, they will usually suffer torture and death. Peons are basically slaves, that are owned directly by the chief, but can be used by anyone of the stronger class to do errands.

A low natural strength always puts the character into the peon class.. "Might makes Right" is how Red Orcs live. If a warrior ever loses enough strength, they will lose their warrior status in the tribe and be considered a peon and will be considered a pariah of the tribe and exiled or enslaved. The society of the Red Orcs has instilled an innate fear of being weak, or being weakened.

Males and Females can use the same name, there is no distinction between masculine or feminine. Very often a nickname is added to the first name related to their prowess on the battle field or (for peons) their jobs within the tribe. (For example Grakguul Spleen-Splitter, or Flop Pooper-Scooper, etc.) very often -guul is added to the name at birth.. which means "warrior"(such as Arghguul) If the name is of the peon class this is not added.

Very aggressive Orcs of fiendish ritual experimentation. Easily recognized by their red skins and ape-like faces.
Ability Score Increase. Your Strength, Constitution scores each increase by 1.
Age. A Red Orc reaches adulthood at 15 and Maturity at 20. Most Red Orcs die early, but it is not unheard of for a Red Orc to reach 55 or more.
Alignment. The warriors of the tribe tend toward Chaotic alignments, usually Evil, but pariahs of other alignments do occur. Peons will have Lawful or Neutral alignments, usually Evil or Neutral due to being forced to obey.
Size. Red Orcs vary widely in height and build depending on their social class within the tribe, from under 5 feet to well over 6 feet tall. Your size is Medium.
Speed. Your base walking speed is 30 feet.
Darkvision:. Red Orcs have a form of darkvision. You can see in dim light within 60 feet of you as if it were bright light, and in darkness as if it were dim light. You can't discern color in darkness, only shades of gray.
Armor Training. You have proficiency with light and medium armor.
Languages. Can speak Orcish. Dialects from tribe to tribe are different, but usually discernable. Literacy is unheard of. There is no written language of Red Orc.
Subrace. There are three sub-races of Red Orc. Vulgar, Terrible, and Peons. These names are only used by outsiders to distinguish the sub races. The Red Orcs themselves only call themselves Red Orcs, regardless of sub-race.

Design note: This subrace requires a natural Strength score of 11 or more. Otherwise you must choose the Red Orc Peon subrace.

Ability Score Increase. Your Dexterity score increases by 1.
Relentless Endurance. When you are reduced to 0 Hit Points but not killed outright, you can drop to 1 hit point instead. You can’t use this feature again until you finish a Long Rest.
Aggressive. As a bonus action, you can move up to your speed toward an enemy of your choice that you can see or hear. You must end this move closer to the enemy than you started.
Badlands Survival. Whenever you make a Wisdom (Survival) check while in badlands or arid climates, you are considered proficient in the Survival skill and add double your proficiency bonus to the check, instead of your normal proficiency bonus.

Design note: This subrace requires a natural Strength score of 11 or more. Otherwise you must choose the Red Orc Peon subrace.

Ability Score Increase. Your Strength score increases by 1.
Greater Menacing. You gain proficiency in the Intimidation skill. You also have advantage on saving throws against being frightened
Savage Attacks. When you score a critical hit with a melee weapon Attack, you can roll one of the weapon’s damage dice one additional time and add it to the extra damage of the critical hit.
Aggressive. As a bonus action, you can move up to your speed toward an enemy of your choice that you can see or hear. You must end this move closer to the enemy than you started.
Powerful Build. You count as one size larger when determining your carrying capacity and the weight you can push, drag, or lift.

Design note: This subrace requires a natural Strength score of 10 or less. Otherwise you must choose one of the other two Red Orc subraces.

Red Orcs that are much smaller and weaker, but more crafty.

Ability Score Increase. Your Intelligence score increases by 1 and Your Dexterity score increases by 1
Cowardly Nimble Escape. You have disadvantage on saving throws against being frightened, but You can take the Disengage or Hide action as a bonus action on each of your turns.
Sneaky Peon. A peon uses guile in order to survive.. Peons may choose one proficiency in either Stealth or Sleight of Hand. But cannot start with proficiency in Intimidation.
Peon Primal Intuition.. You have proficiency in two skills of your choice from the following list: Animal Handling, Insight, Nature, Medicine, Perception, and Survival.

Peons have stunted growth because they only get the leftover scraps or whatever they can steal.

When creating a Red Orc character, you can use the following table to add in some flavor to your looks, if you desire. Or choose your own.