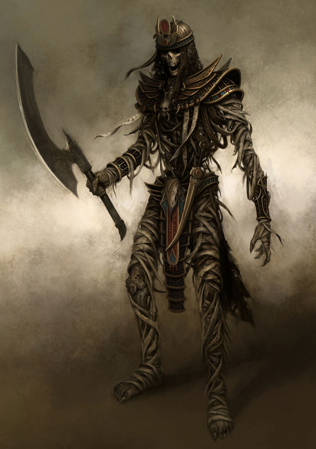 Mummy Paragons are, not to put too fine a point on it, the mummy's mummy. They are the strongest, toughest guards and the best clerics among mummies.

The Mummy Paragon, being a mummy, has an acceptable bag of tricks. He excels at grappling and carrying, and has the hit points to handle melee combat. Furthermore, his Improved Preservation means he can end up with +8 Natural Armor--a respectable number.

Bestow Curse is useful for weakening or disabling an enemy for other party members to come along and handle.

Meanwhile, the magical side is not neglected, so the mummified priests can continue their spellcasting.

Races: Humans and Elves both have made mummies, but the process works as well on other races.

Alignment: Any, but...probably leaning towards Evil.

All of the following are class features of the Mummy Paragon

Improved Preservation (Ex): The Mummy Paragon gets even tougher. Each class level, his natural armor bonus increases by 2.

Beetle Discorporation (Su): As a full-round action, the Mummy Paragon may dissolve into a cloud of insects, such as scarabs or locusts. This is identical in all ways except visually to gaseous form and has a caster level equal to character level. Reforming is also a full-round action.

Religion: Mummies do tend to be religious. Considering how old they can be, they often worship ancient, nearly forgotten gods.

Combat: The Mummy Paragon is best suited for melee combat--especially grappling. They can, however, make effective militant clerics, backing up their spellcasting with some raw strength. Also, their ability to curse enemies with a variety of weakening effects makes the Mummy Paragon a useful frontline combatant who can weaken enemies for the other party members to deal with.

Advancement: Cleric or Fighter. Some Mummy Paragons go on to become Mummy Lords.

Mummy Paragons in the World[edit]

Mummies can be incredibly ancient, which makes one in normal society a source of comedy gold, especially if he's been in seclusion for a thousand or more years.

NPC Reactions: Fear. Hostility. Etc. Although Mummies tend to smell nice from the resin soaked into them.

Characters with ranks in Knowledge (Religion or History) can research Mummy Paragons to learn more about them. When a character makes a skill check, read or paraphrase the following, including information from lower DCs.

Mummy Paragons in the Game[edit]

Mummy Paragons serve as the guardians of tombs.