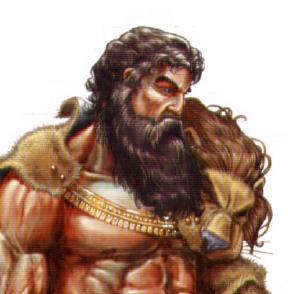 Morton Frightful is the demigod of protection, vigilance, and war. He is also known as The Defender.

Legend has it that if it hadn't been for circumstance, none would know of Morton Frightful. Morton lived out his early life as the son of a farmer, and, very appropriately, wed and became a farmer himself. Because of his exhausting daily routine, Morton was a very fit man. After an afternoon in the most distant of his fields, Morton returned home to discover that his family had been raped and murdered, and his home burned down, by a passing orc scout party.

This is were the legend of Morton Frightful begins. His mortal surname has been lost to time, but the moniker he earned that night has been adopted by even himself: Frightful. Morton tracked down the scout party, which had already returned to its full army. It has been told that the army was of 10,000 orcs. However, whether this is a true figure or just the result of generations of oral renditions is not known.

What is known, is that Morton single-handily slaughtered an army of great size. So furious and painful was his wrath that it caught the attention of the Gods. Morton was hired as an assassin, sent to take care of those who were upsetting the balance of good and evil, or damaging mother nature.

His travels would take him to every corner of the known world. He studied under the greatest fighters of legend, and was taught by wizards and spell casters whose name still ring out in city streets. Because of this, Morton and his followers have the benefits of both the physically strong and the mentally keen.

Followers of Morton follow but one saying: Fight Fire with Fire!

Clerics of Morton, the few who do exist, know better than to erect a temple in the name of their demigod. Morton respects Nature, and that which is good in the world. The perfect temple is nature.

The most common gathering of followers is on the battlefield, as most followers of Morton are CG Fighters and Barbarians, who are fighting to protect their homeland or something else that is good in the world.