Design Note: This race appeared in AD&D 2nd and 4th Edition in the Dark Sun Campaign Setting and is adapted to 5e. 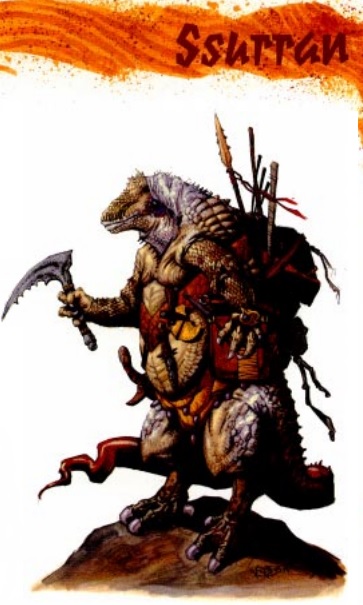 Ssurrans are nomadic, humanoid reptiles. Some are raiders while others are simple hunters. As lizardfolk of the desert, they have adapted to the heat of the Athasian day and are active even during the blazing mid-day heat.

Adult Ssurrans vary widely and can be as short as a dwarf to as tall as an Ogre, weighing anywhere from 150 to 300 pounds. The size of a Ssurran really depends on whether the egg was laid at a time when the tribe had ample food resources. An egg that was not given enough nutrients when it was laid tends to hamper the growth of Lizardfolk even after they are born. This is a mystery to the Wizard scientists that have studied it, but they think that it has to due with the lack of a specific protein being passed on by the mother. There is little difference between males and females. Their skin tones range from light brown to red, and sometimes even albinos are born, which are always seen as a good omen. Their faces are as other Lizardfolk, and they have forked tongues.

Ssurrans speak a very archaic and degenerate version of the Draconic language that sounds like grunts, growls, and hissing. Their tails are 2 to 3 feet long and are not prehensile.

Ssurrans typically dress in little more than loin cloths, bone jewelry, and armor. They usually carry weapons of bone fashioned from the creatures that they hunt.

Ages ago when Athas was green and lush, the ancestors of the Ssurran were normal Lizardfolk that you might find on any other sphere in the Material Plane. The Lizardfolk of Athas worshipped the same gods and had some of the same tribal societies, living in the swamps and the tropical regions of the world.. That all changed when Athas started to die. As the soil began to change, so did the Lizardfolk. As you may, or may not know, whatever soil the eggs are hatched in will determine the type of Lizardfolk you get.. Over several millennia the native Athas Lizardfolk began to change along with the world, by the Dark Sun age they were no longer omnivorous, too many of the plants of Athas became dangerous, so they became strict carnivores. They became resistant to heat and became much tougher than their ancestors. Then came the Cleansing Wars of Rajaat the Defiler, Lizardfolk were thought to have been completely wiped out of existence and gone extinct, but a last remnant of the Lizardfolk were hidden away by the Mind Lords and this saved the Lizardfolk of Athas from complete extinction. Since that time they have been loosed onto the world again to do as they have always done.. Survive and Reproduce, as Semuanya commands.

Ssurrans roam Athas, seeking shelter and food. There have been cases when multiple tribes have joined together against a common threat. These multitribal groups are led by a council of elders formed from the shaman/leaders of each tribe. Ssurrans are strict carnivores. They prefer the flesh of halflings, but prey upon any living thing they find. Ssurrans are nomadic creatures and they generally stay in one area for only a few weeks before moving on. It is said that a great Sorcerer-Queen of the Ssurrans resides on Athas, and that she makes her home in a lost temple in one of the salt marshes. This is true and this great Sorcerer-Queen has taken the form of an ancient Brown Dragon. Some Ssurrans worship the great Ssurran Sorcerer-Queen, who is able to grant her worshippers spells if a Warlock pact is made with her.

Despite their alien outlook on life, some Ssurrans make an effort or are forced to understand other races. Some Ssurrans become slaves of other Sorcerer-Kings and many end up earning or purchasing their own freedom. They often become bodyguards to the wealthy, desert trackers, mercenaries, and even templars. The merchant houses highly seek their services as scouts because of their great survival instinct.

It is said that on Athas no gods are present, this is not entirely true. Most of the remaining Lizardfolk of Athas still worship their obscure gods, of which there are three, but only one of these gods has access to Athas, and that is Semuanya. Semuanya grants it's worshippers survival and reproduction, Life is it's main domain, but there are many other obscure domains attributed to it as well. Semuanya is even able to grant worshippers spells to be used in it's service. There are two other gods that the Ssurran worship on Athas, but they have no power. They are Sess'inak and Tiamat. Worshippers of Sess'inak are typically defilers or necromancers of some kind. There are always shamans and sometimes even druids and mystics among the Ssurran.

The Lizardfolk of Athas are able to be male, or female, or even hermaphrodites. They are able to change their sex over several months. This is a survival adaption, much like the survival instincts of the Kobold. If there are few females or males, members of the tribe may choose to become the other sex to be able to continue to reproduce eggs.

Names almost always start with an S, or X, or a K. You may use standard Lizardfolk names, or make new names based on short degenerate Draconic words. Such as Ssa, Xssa, Kssa, Rroo, etc..

There is no distinction between male and female names.

Ssurrans are Lizardfolk that have adapted to the harsh desert and arid environments.
Ability Score Increase. Your Constitution score increases by 2 and your Wisdom score increases by 1.
Age. Ssurrans reach maturity at age 10 and rarely live longer than 35 years, but it is not unheard of for a Ssurran to reach 60 or more.
Alignment. Ssurrans tend toward neutral and lawful alignments.
Size. Ssurrans vary widely in height and build, from 4 feet to well over 7 feet tall. Your size is Medium
Speed. Your base walking speed is 30 feet. Your digging speed in sand or silt is 20.
Hungry Bite. Your fanged maw is a natural weapon, which you can use to make unarmed strikes. If you hit with it you deal piercing damage equal to 1d6+ your Strength modifier. In addition, any damage that is done grants temporary hit points up to your Constitution modifier. The maximum temporary hit points you can have at any time from this trait is equal to your Strength modifier + your Constitution modifier. These are lost whenever you take a short or long rest or if lost in combat.
Heavy Natural Armor. You have very tough scaly skin. When you aren't wearing armor your AC is 13 + your Dexterity modifier. If you are wearing armor, you may increase your AC by 2. A shield benefits as normal while you use your natural armor.
Silt Ambush. You have adapted to the great seas of silt and sand and are able to burrow beneath quickly. As an action you may disengage or hide by burrowing beneath silt or sand with advantage.
Hold Breath. You can hold your breath up to 15 minutes at a time.
Desert Hunter. You gain proficiency in Nature and Survival. In addition when tracking creatures or trying to find food or water in an arid or desert environment you are considered proficient in the skill and add double your proficiency bonus to the check, instead of your normal proficiency bonus. You are comfortable in hot climates and do not need extra water and do not suffer from exhaustion due to overheating as long as the temperature is not above 50 degrees Celsius.
Cunning Artisan. As part of a short rest, you can harvest bone, hide and any parts from a slain creature and you may create one of the following items: a shield, a club, a javelin or 1d4 darts or blowgun needles. To use this you need a blade of some kind, and/or artisan tools, such as leatherworking tools.
Languages. You can speak a degenerate form of Draconic, and some Common. You are illiterate.

Design note: You may choose height and weight depending on the fertility of the soil around the eggs, and whether the one that laid your egg was properly fed. Or you may use this random table.

When creating a Ssurran character, you can use the following table of traits, ideals, bonds and flaws to help flesh out your character. Use these tables in addition to or in place of your background's characteristics.