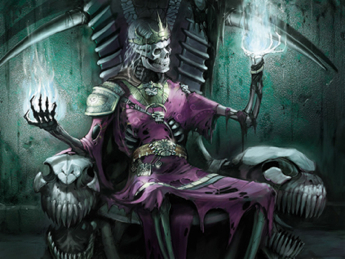 Lichdom, the path to life as the living dead. Superior to any zombie or skeleton, liches transcend death, defying it even after open defeat.

People seek undeath for many purposes, but rarely just to be undead. Instead undeath is a means to an end. The nights without feeling warmth and the joy of others company, the years passing with your friends turning to dust about you... people do not become undead for this. Only a strong desire to extend your life beyond the time of the stars could drive men to such acts.

All of the following are class features of the Lichbound.

Spellcasting: At each level, you gain new spells per day and an increase in caster level (and spells known, if applicable) as if you had also gained a level in a spellcasting class to which you belonged before adding the prestige class level. You do not, however, gain any other benefit a character of that class would have gained. If you had more than one spellcasting class before becoming a Lichbound, you must decide to which class to add each level for the purpose of determining spells per day, caster level, and spells known.

Phylactery: The key part to lichdom is the creation of a phylactery. This expensive and powerful magic item is crafted with the Craft Wondrous Item feat, over the course of 5 levels. When the lichbound finally becomes a lich, their phylactery will store their soul and allow them to respawn in 1d10 days. In order to continue leveling in lichbound, you must complete your phylactery by certain points.

At level 1 you must first get the basic framework of your phylactery prepared, spending at least 24,000 gp and 960 xp on its construction. Every level after, you spend that amount again, improving the phylactery until you have completed the entire 120,000 gp and 4800 xp value at 5th level. Until you construct the required amount, you cannot benefit from the abilities of the lichbound class at that level or beyond. You may, however, complete the phylactery ahead of time if you so see fit, so long as when it is completed it has a caster level minimum of 11th. At 5th level, you have an additional requirement to gain the benefits of lichdom, the final process (see Lichdom below).

Resistances (Ex): The cold chill of death has begun to seep into your body. At level 1 you gain energy resistance to cold and electricity 5. Every level after it rises to by +5 to resistance 10 at 2nd, resistance 15 at 3rd, and resistance 20 at 4th. The process of lichdom eventually overwrites these resistances with immunities at 5th level.

Paralyzing Touch (Su): Your negative energy touch attack comes with a paralyzing effect at level 2 and beyond. Any living creature a lichbound hits with its touch attack must succeed on a Fortitude save or be paralyzed for 1d4 rounds. Remove Paralysis or any spell which removes a curse can free the victim. The effect cannot be dispelled. Anyone paralyzed by the lichbound seems dead, thought a DC 20 Spot check or DC 15 Heal check reveals the victim is still alive.

At 3rd level the duration of the paralysis rises to 1d4 minutes. At 4th level it rises again, becoming 1d4 hours, and finally 5th level where the lichdom process makes the duration permanent.

Lich Skills: Lichbound gain a racial bonus to their abilities as they grow, starting at level 1. Lichbound receive a +2 bonus to Hide, Listen, Move Silently, Search, Sense Motive, and Spot, and the bonus increases by 2 for every level up to a maximum of +8 at 4th level.

Ability Score Bonuses: Lichbound gain ability score increases as they level. At 1st level the studies into the lichdom process has granted them insight into the dark works of magic and greater knowledge. They gain a +2 Int bonus. At 3rd level, their body becomes aware of the sinking void that is being born within them, granting them a +2 Wis bonus. Finally as the lichdom ceremony is completed at 5th level, the lichbound surges with confidence and power gaining +2 Cha.

Fortification (Ex): At 2nd level, the vital organs of the lichbound begin to shut down and die. As such they become more difficult to strike a critical hit against. They gain light fortification, providing a 25% chance to avoid a critical hit. At 3rd level, more organs fail, providing 75% protection. At 5th level the lichdom process overwrites this ability as you become absolutely immune to critical hits.

Fear Aura (Su): Lichbound are surrounded by a dreadful aura of death and evil after their 2nd level. Creatures of less than 5 HD in 10 ft. of the lichbound must succeed on a Will save or be affected as by a Fear spell of a sorcerer of the lichbound's HD. A creature which successfully saves against the aura cannot be affected by the same aura again for 24 hours. At 3rd level, the aura expands to 30 ft. Finally at 4th level the aura expands again to its full 60 ft.

Lichdom: After 5 levels the lichbound is finally ready to perform the lichdom process. In a ceremony where one must perform an act of unspeakable evil, the lich binds himself to darkness and dies, only to rise moments later as an undead. The lichbound gains the Lich template which they have been slowly gaining, including the +5 natural armor, permanent paralysis and negative energy touch attack, 60 ft. fear aura, no Con score, d12 hit dice on all their HD in the past and in the future, +4 turn resistance, lich racial skills at +8, immunity to cold, electricity, and polymorphing, and all undead immunities and weaknesses. The newly formed lich uses his Cha score for any Constitution based skill checks that need to be made (namely Concentration). You do not gain the template's LA, as you have paid for it taking the Lichbound class.

Because of the evil nature of the lichdom ceremony to bind your life force to the negative energy plane, if you were not evil before you are now. This does not stop the lichbound from changing alignments in the future, but few do after getting their hands bloodied in acts of evil.

Combat: Lichbound are what they were previously... wizards, sorcerers, and other types of casters. Their undeath has not changed this.

Advancement: As casters, any caster-friendly classes are theirs to take. Since they lose two caster levels, prestige classes that do not stunt their growth are advised.

Resources: Liches are a solitary sort. Because the process to become one is so vile, no one wants such a being living in their midsts.

Lichbound are for any caster who wishes to taste immortality, for whatever reasons may drive them to such drastic ends.

NPC Reactions: Undead are often reviled, and liches more so, for they are not mindless automations but people who have chosen something terrible. As such, liches have no place in the civilized world to call home. But many have already lived such a life to begin with.

Characters with ranks in Knowledge Religion can research Lichbounds to learn more about them. When a character makes a skill check, read or paraphrase the following, including information from lower DCs.

Lichbound tend to be a lonely sort. Whatever drives them to undeath rarely makes for good company. Still, a lichbound may be in the company of (generally evil) adventurers, as they perform the process and afterward.

Adaptation: One could take a -1 penalty to your Con score to show the degrading life of the lichbound. As this weakens the class, it is advised you add in certain benefits, such as the acquisition of undead immunities and/or increasing the HD of the class to d12.

Sample Encounter: Gendo, a mad kobold leader who wants to gain immortality so he may guide his kind to glory no matter how long it takes, is about to complete his final level of the process. Stop him before he comes a full lich and becomes unstoppable.