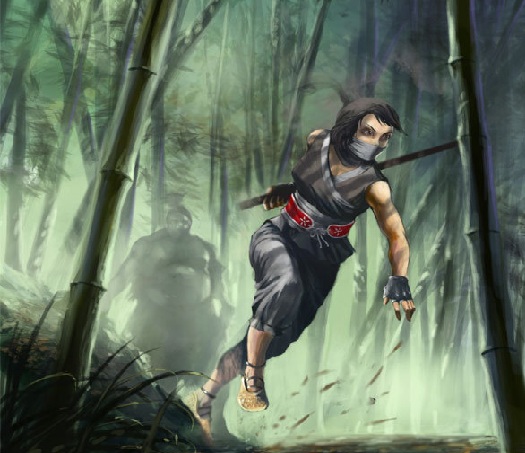 Known as "The Shadowed Ones" or "The Hidden Guardians" by the kender, Kender Ninja are the highest ranking soldiers of what the kender would consider their military. Kender Ninja are loved and admired by the people, their mastery of being useen and picking pockets is incredible compared to the average kender. They dress in black ninja robes, which covers their Kender Mithral and any weapons they weild.

Aspiring kenders dream of becoming part of the Kender Ninja. Loved by Kender society, the Kender Ninja are silent guardians, and sometimes kender soldiers. There have been stories, of raids on vaults of enemy nations. None of which were ever confirmed, mainly because anyone who saw the kender didn't see enough, or they died mysteriously the night of the raid.

Weapon and Armor Proficiency: Kender Ninja are trained in using all simple weapons and the Kama, Katana, Kusari-Gama, Ninja-to, Nekoda, Nunchaku, Sai, Shortbow, Shuriken, and Tonfa. They're also trained in the use of all Kender weapons (Ex. Hoopak), including Kender Mithral Armor and Kender Mithral weapons.

AC Bonus: Kender Ninja gain Ac bonus as a monk, except, Kender Ninja use their Charisma modifier and not their Wisdom modifier. Also, Kender Ninja get this bonus when wearing no armor, light armor, or Kender Mithral armor.

Luck Jutsu: A mysterious set of techniques known by Kender Ninja. Luck Jutsu's refer to a Kender ninja's ability to maniputlate luck magic. Instead of gaining spells per day, a Kender Ninja gains a small amount of Spell-Like Abilities as class abilities. A Kender Ninja gains one Luck Jutsu of it's choosing at 1st level and every 3 levels after (1st, 4th, 7th, and 10th). A Kender Ninja can a number of Luck Jutsu a day equal to his newly changed charisma modifier (Adding in Shadowed and any other bonuses).

Poison Use: A Kender Ninja gains the ability to apply poisons to his blade or arrows without dangering himself. (He also doesn't risk poisoning himself when poisoning a drink or etc).

Sneak Attack: A Kender Ninja gains a sneak attack, as a rogue, at 2nd level. This Sneak Attack stacks with any other sneak attack (Or Sudden Strike, Or Etc).

Passwall: For a number rounds equal to your current charisma modifier + your class level, you become semi-incorporeal. You pass through walls as if they arn't there. You also can move through non-living beings as they wern't there, but they can still attack you and you can attack them (You both have a 40% miss chance however). You gain a +8 on move silently checks. You won't fall through objects unless you want to, and if your knocked unconcious the Jutsu ends.

Grand Leap: For a number of rounds equal to your current charisma modifier, you gain +20 on jump checks. You have no limit on your jumps based on height or size, and you are considered to have 30ft running start for each jump. You also take no falling damage from 10ft/level of falling.

Body Clone: This Jutsu allows you to make copies of your self, equal to your charisma modifier. The Copies have an Ac equal to 10+Your Dexterity Modifier+Any Ac bonuses from your class. You don't "control" the copies, but they are you and the player would play as them. You can't communicate with the clones, but when one of them dies you absorb all of their memories sense you made them. A clone appears as you, and has your skill list, but can't attack. The clone has no HP, so when it's struck by an attack it disappears. The clones also only exist a number of minutes equal to 2 times your charisma score. You can only use this Jutsu when you don't already have clones out. You can force any number of clones to vanish as a swift action.

Flaming Projectile: The character takes a thrown weapon and imbues it with the power of explosive power. As a move action, you take a thrown weapon or projectile, a kunai, shuriken, or arrow, and you add 1d6 fire damage/every two levels (min of 1d6). It explodes with a 20ft radius, and everyone inside is set on fire (Ref Dc 10+Your Level+New Cha Mod).

Body Flicker: The character teleports a short distance. You can't bring people with you, but you can't accidently teleport into a wall. You can teleport to a maximum distance of 20ft/level.

Life Drain: The character's natural attacks damage the enemy's physical abilities. When you hit with a natural attack, you do 1d4 Str, Dex, or Con (Your choice) damage to your enemy. (Fort Dc 10+Class Level+New Cha Mod). All your natural attacks do this for a number of rounds equal to your new charisma modifier.

Shadow Beast: The character summons a being made of shadow that serves him. Activating this Jutsu takes (15-your new charisma modifier) rounds. You summon a creature, it's hit dice must be 4 less then your own, or less. It's intelligence, wisdom, and charisma drops to 6 or stays the same if it's lower. It also cannot use any intelligent based abilities or cast spells. It's a shadow beast, meaning that it's a copy of the actual creature. It serves you completely, and you can give it a new order as a standard action. Even though it's intelligence is low it will understand any order given to it. It has half the normal hp but gains a miss chance of 40%. The summoning lasts for a number of minutes equal to your new charisma modifier.

Invisibility: You become invisible as the spell Greater Invisibility. It lasts for a number of minutes equal to 2 times your new charisma modifer.

Combat: Kender Ninja tend to fill in for any fighter or rogue. They hit hard and move fast.

Advancement: With the high Charisma at the end of this class, an obvious choice would have to be to gain a few levels in sorceror.

Kender Ninja in the World[edit]

Kender Ninja in the Game[edit]