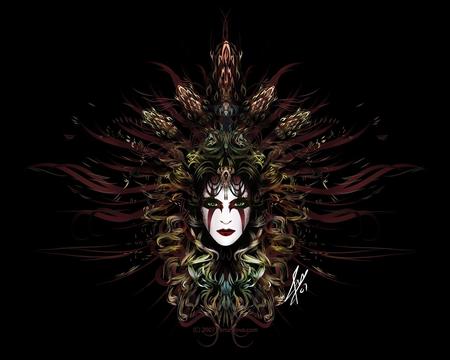 To be a Jester is to see the joke in every tragedy. For them, life’s a party, and most poor bastards are not invited. They live hard, play hard, and laugh hard knowing that at any moment their life might be cut short by an uncaring world. Jesters may play at being buffoons, but each is a student of life and of people, and they understand not only what makes people laugh, but what makes them cry. As adventurers, they often appreciate baubles and magical trinkets as much as anyone else, but their main goal is to have fun. When fighting enemies, their sense of humor takes a macabre and dark turn, becoming cruel and vicious to better demoralize their foe. As followers of the Laughing God Who Has No Temples, they are generally disrespectful atheists who wander the world looking for excitement and amusement, righting wrongs or committing crimes as the mood takes them.

Races: Jesters appear in all cultures and all races have need of buffoons.

All of the following are class features of the jester.

Weapon and Armor Proficiency: Jesters are proficient with light armor but not with shields of any kind. A jester is proficient with no weapons. However, perhaps especially, improvised weapons may be used without the usual -4 penalty.

Spells: The jester is an Arcane Spellcaster with the same spells per day progression as a bard. A jester automatically knows every spell on his spell list. He can cast any spell he knows without preparing them ahead of time, provided that spell slots of an appropriate level are still available. To cast a jester spell, he must have a Charisma at least equal to 10 + the spell level. The DC of the jester's spells is Charisma based and the bonus spells are Charisma based. Jesters choose their spells from the following list:

Poison Use (Ex): A Jester may prepare, apply, and use poison without any chance of poisoning himself.

Ignore Components: A Jester may cast spells from the Jester list without using material components, unless they cost more than or equal to 1000 gp. This has no effect on any spells that a Jester casts from any other spell-list.

Harlequin’s Mask (Ex): As long as a Jester’s face is painted, masked, or adorned in the manner of a harlequin or other comedic figure, he is immune to compulsion effects.

Laugh It Off (Ex): Fate protects fools and little children, and Jesters certainly adopt the role of fools. At 2nd level, a Jester may add his Charisma modifier as a morale bonus to his saves.

Power Slide (Ex): If a 3rd level Jester takes damage from an attack, he may allow himself to be flung backwards, thereby lessening the impact. He may make a balance check with a DC equal to the damage inflicted and if she succeeds, he suffers only half damage. This is a skill check, not a Saving Throw, so abilities such as Evasion do not apply. He is moved away from the source of damage by 5' for every 5 points of damage (or part there of) negated in this way. If there is not enough space for him to move, he suffers a d6 of damage for each square not moved. If he passes through an occupied square provoking AoO, the Jester would have to make a tumble check to avoid any attacks of opportunity, following the rules of tumble.

If this ability is gained from another class, then the Jester may choose to increase or decrease the total distance moved by 50% (so a Power Slide that negated 12 points of damage can cause him to move 5’, 10’, or 15’ at her choice).

Jester’s Feint (Ex): At 4th level, a Jester learns to distract and unnerve his enemies by throwing unexpected objects at them. As a swift action, he may toss a brightly colored object in the square of an enemy with a Sleight of Hand Check opposed by the enemy’s Spot check. If it succeeds, the enemy is denied his Dex bonus for the Jester’s next attack. This ability does not work against creatures who do not use sight.

Some Jesters use objects with magical or alchemic effects that act in an enemy’s square to use with this ability, while others use colored balls, fruit, pieces of cloth or scarves, or other cast-off materials that fit the requirement of being brightly colored. Wealthy, desperate, or foolish Jesters sometime used coins or gems.

Cruel Comment (Su): At 5th level, the Jester has learned to say extremely funny but hurtful things about others. As a swift action, the Jester can make a Bluff check opposed by a d20 + target’s level + Charisma check. If the target fails this check, he suffers a -4 to attack rolls, saves, and all other checks. This effect lasts 1d4 rounds. This is a language-dependant compulsion ability.

Sight Gag: At 7th level, the Jester may apply the Silent Spell and Still Spell metamagics spontaneously to his spells, but only if he casts them as full-round actions. This ability only works with spells on the Jester list, and it does not increase the spell’s level or slot used.

Low Comedy (Ex): By using this ability, a Jester of 8th level or higher can double the armor check penalty of an opponent within 50 feet that he hits with a ranged touch attack. Using this ability is an attack action and counts as a thrown weapon. The penalty can be restored to its normal value with 10 minutes and a bar of soap.

Slapstick (Ex): At 8th level, any successful sneak attack also inflict a -2 Dex penalty to an enemy for one round.

Jack-in-the-Box King (Sp): Twice per day, a 10th level Jester may use fabricate or major creation as a spell-like ability, but only if he is constructing weapons or traps.

Tricky Hands (Sp): At the 11th level the Jest has mastered Sleight of Hand and may produce any non-magical weapon from thin air as a quick action. Any enemy that can see your hands get to roll a Spot Check versus your Sleight of Hand, if they succeed this ability fails.

Killer Clown (Su): At 12th level, so long as he meets the requirements of his Harlequin’s face ability, the Jester can make a special Intimidate check as a move action. If successful, this check causes the enemy to suffer the panicked condition for 1d4 rounds. This is a mind-affecting fear effect.

Annoy the Gods (Su): As world-class pranksters, Jesters must learn to avoid the curses and transformations of enemies with a sense of humor. Any time a 14th level Jester has spent at least one round as the victim of an effect that could be removed by a break enchantment effect, the effect is removed.

Prat Fall (Ex): At 16th level, any time a Jester strikes an enemy with a sneak attack, the Jester can make a free Trip attack that does not provoke an Attack of Opportunity. This ability cannot be used on any one enemy more than once a round. The Jester may not be tripped if this fails, and it may be used with ranged sneak attacks. The Jester may substitute his Dexterity modifier for his Strength modifier for the opposed test to trip his foe.

Last Trick (Su): At 18th level, the Jester can turn even his death into a joke. Any time the Jester is killed or knocked unconscious, one of his spells known is cast as if it were spell in a contingency effect.

Eternal Trickster (Ex): At 20th level, the Jester can become a personification of the Laughing God Who has No Temples. While meeting the requirements of his Harlequin’s Mask ability, he does not age and is under the effects of a mind blank effect.