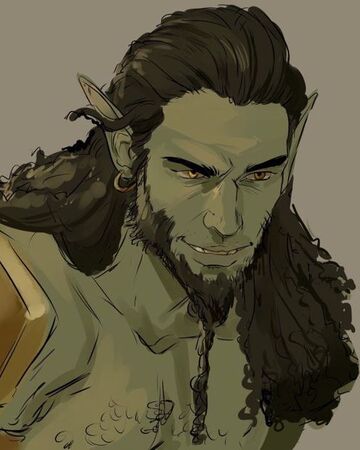 While they keep the outward skinny appearance that most Elves have, they retain the tough skin of an Orc.

Both Elves and Orcs shun Green Elves, not accepting them as apart of their society.

Depending on their parents, Green Elves can have either Orc or Elf names.

Half-Elf, Half-Orc
Ability Score Increase. Your Strength score increases by 2 and your Wisdom score increases by 1.
Age.
Alignment.
Size. Green Elves vary widely in height and build, from barely 5 feet to well over 6 feet tall. Your size is Medium.
Speed. Your base walking speed is 30 feet.
Darkvision. Thanks to your Elf and Orc blood, you have superior vision in dark and dim Conditions. You can see in dim light within 60 feet of you as if it were bright light, and in Darkness as if it were dim light. You can’t discern color in Darkness, only Shades of Gray.
Fey Ancestry. You have advantage on Saving Throws against being Charmed, and magic can’t put you to sleep.
Menacing. You gain proficiency in the Intimidation skill.
Relentless Endurance. When you are reduced to 0 Hit Points but not killed outright, you can drop to 1 hit point instead. You can’t use this feature again until you finish a Long Rest.
Languages. You can speak, read, and write Orcish, Elven, and Common.

Ability Score Increase. Your Charisma increases by 1 instead of Wisdom
Superior Darkvision. Your darkvision has a range of 120 feet, instead of 60.
Sunlight Sensitivity. You have disadvantage on attack rolls and Wisdom (Perception) checks that rely on sight when you, the target of the attack, or whatever you are trying to perceive is in direct sunlight.