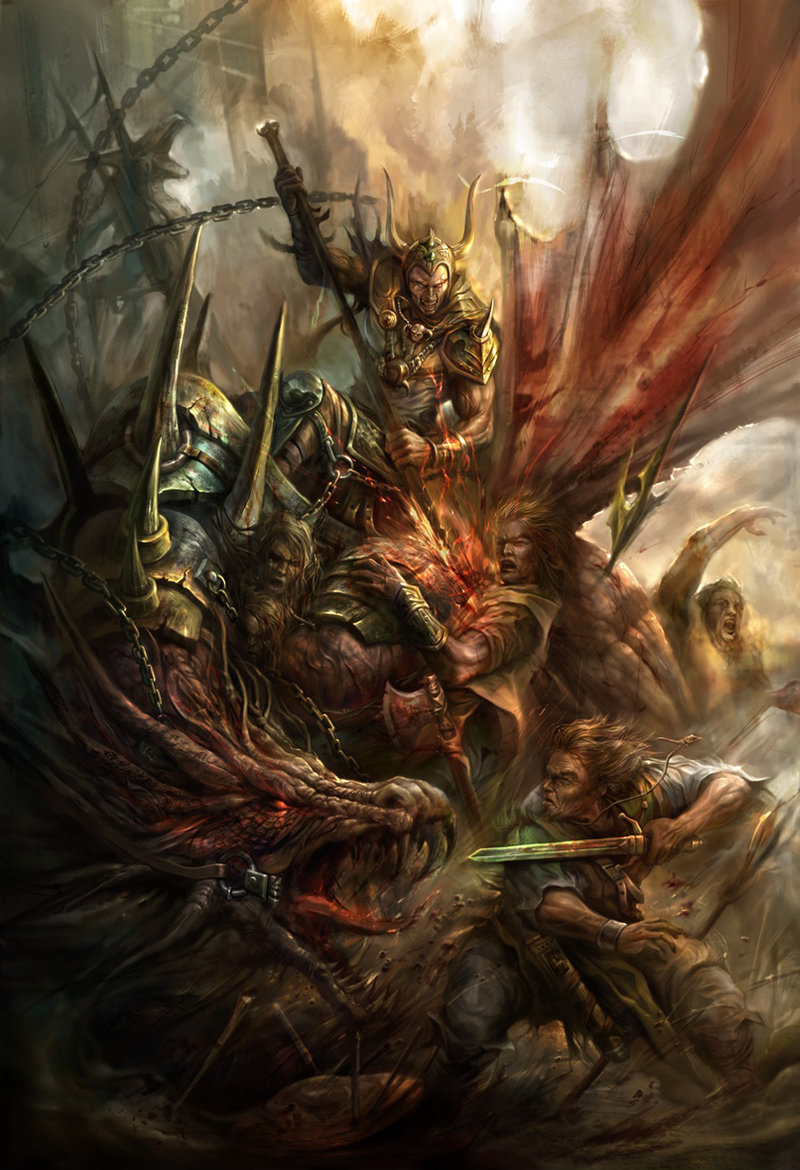 A rider and his dragon are bound together in order to become a powerful duo of awesome might, soaring through the air and raining devastation or justice on the world.

Allignment: Any (as long as it matches bound dragon's alignment)

All of the following are class features of the Dragonbound rider.

Dragonbound Riders are proficient with simple and martial weapons and with all types of armor (heavy, medium, and light), and with shields (except tower shields).

A Dragonbound Rider can fashion armor and shield for himself from the discarded scales of his mount, gathering GP worth of scales per day equal to his dragon's HD. This is appropriate Dragonscale equipment that does not require the skinning of a live Dragon. While the Dragon Rider is using it, this Dragonscale equipment has Damage Resistance 1 (increasing by 1 for every 5 HD the dragon has), and natural resistance to the dragons' element.

Dragonbound rider levels count towards Pvaladin mount levels. In addition, at every even level (2,4,6,8,10,etc.) the dragonbound rider may gain a ride related feat, or treat his level has two levels higher for any multi-classes. This includes spells for magic users and abilities for the rest.

The bond between rider and dragon gives the dragon increased vitality. At levels 3,5,7,9,11,13,15,17,19,21,23 the dragon gains 1/10th of the health that it's rider has. This is calculated after the rider has finished applying any ability points and increasing their health from leveling up.

Being tied to a Dragonbound rider causes changes in a dragon's maturation. starting at 3rd level, and every other level after(3,5,7,9,11,13,15,17,19,21,23...) the dragon advances one age catagory,his companion immediately grows to that age, in both body and mind. Because of this the dragons age is averaged with that of the dragon riders age as if they were one creature.

At levels 4,9,14,18, you may choose one extra feat. it can be any feat you meet the prerequisite requirements for except spellcasting feats.

You trade your Dexterity modifier to armor class for your Strength modifier. This bonus functions exactly the same as a Dexterity bonus to Armor Class.

Whatever a Dragonbound rider does with her life, the special skills of her Dragon Mount's race are class skills for her, and she gains a +3 bonus on them.

A Dragonbound rider is naturally resilient to whatever it is that her dragon breathes. She gains Energy Resistance equal to her Base Attack Bonus to that energy type.>

A 6th level Dragonbound rider has Blindsight out to 30', as well as Darkvision out to 60' and Low-light Vision.

A dragonbound rider is able to communicate telepathically with his dragonbound mount no matter the distance.

The dragonbound rider is able to focus the elemental force of the dragon into his attack once every 1d4 rounds, causing +4d6 damage of the dragon mounts energy type, progressively getting more powerful by 1d6 every 2 levels(lvl9=5d6, lvl11=6d6, lvl13=7d6 lvl15=8d6...). Size of cone at lvl7 is 9m and it will continue to rise by 2m every 3 levels.

Any dragon mount ridden by a Dragonbound rider is treated as having the Flyby Attack feat, even if it doesn't already have it. If it does, it gains another feat that it could take at that level.

By training with such ferocious creatures, Dragonbound rider have developed a superior sense of bravery, and are immune to all types of Fear.

At 12th level, Dragonbound rider harness their Draconic spirit to bolster their own combat abilities, and can strike their foes down with more force. Dragonbound rider add +1 to their threat range (max 15-20) and critical multiplier for all proficient weapons. This may stack with Improved Critical or other things of the same effect

At 13th level, a Dragonbound rider gains a bonus equal to his Charisma bonus (if any) on all saving throws

At 15th level, a Dragonbound rider gains immunity to whatever energy type his Dragon Mount breathes. Also, he has +10 to any roll against Sleep, Paralysis and Aging.

Having spent enough time with their bonded dragon, the dragonbound rider gains the Aura of fear from the Dragonbound mount even when away from their companion.

At 20th level, the Dragonbound rider has enough innate knowledge of their Dragonbound mounts to develop learn one of their dragon's Abilities. The Dragonbound Rider can choose any of the abilities unless it is already known.

When either the rider or his dragonbound mount dies, the other may live. In case of the rider if the dragon dies the rider loses half of his health and all of his dragonbound rider levels. If the rider dies the dragon loses the health bonus from Impressive specimen. In both cases, the survivor must make a will save of 20 or higher to not go insane. If they get below 25, they live out the rest of their lives in solitude, never again interacting with another living thing. Effects cease should the dead be revived.

Religion: Dragonbound riders follow whatever religion suits their alignment along with that of their dragonbound mounts alignment. Both must have similar alignments, but not necessarily worship the same deity.

Other Classes: The dragonbound rider will ally himself with any other class that will strengthen him and his mount in some way, as long as they are of similar alignment.

Combat: death from above, the last thing people see, the role of the dragonbound rider is to rule the battle field with utter supremacy.

being a Dragonbound rider makes you a weighty force in the world, however you choose to use that power. you could lead armies, lay waste to cities, champion for good or evil, whatever you do, you will reign supreme.

Characters with ranks in gather information can research Dragonbound riders to learn more about them. When a character makes a skill check, read or paraphrase the following, including information from lower DCs.

LA: +1 for each Dragon Age Category