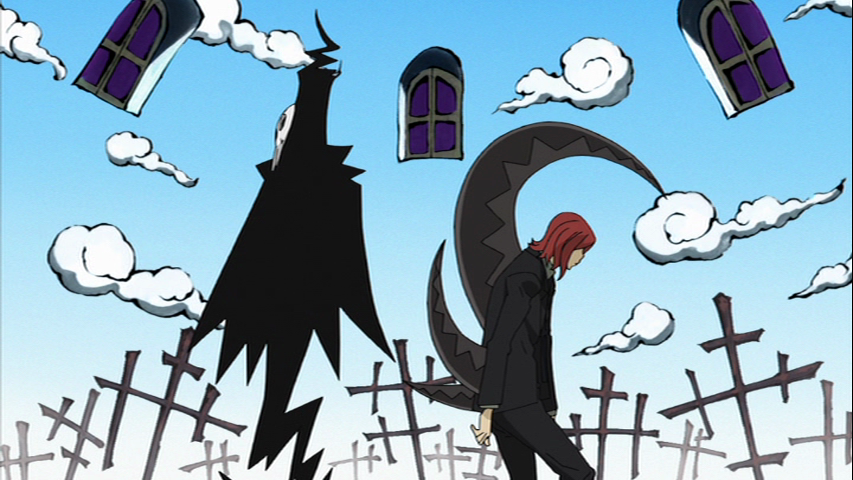 Death Scythe, Spirit sprouting scythe blades from his body without changing any of his body.

"People and Gods alike possess weaknesses. In order to bury those failings, they seek strength and power. Fear and desire are two sides of the same coin." -- Lord Death

Death Scythes are those who, in going above and beyond the call of their fellow demon weapons, can do amazing things. For all intents and purposes, Death Scythe Levels stack with Demon Weapon Levels for Demon Weapon Form, for example From Demon to Devil, or The Damage Modifier

Note: The Witches Soul One does not necessarily need to kill a witch, a hag, or even a magical being in order to become a Death Scythe. For all Intents and Purposes, a Creature with a CR of either 12 or 5 Higher than your level will qualify as a Witch Soul. It can also be a creature with levels instead of CR, for example, a Minotaur (CR of 4) with 4 levels of Fighter against a 3rd level Demon Weapon would qualify as a Witch Soul.

By consuming the final witch's soul a Death Scythe is granted numerous powerful abilities. This is achieved by the advanced wavelength control gained from the witch's soul that has been obtained, which can give rise to magical abilities, manifesting further special abilities.

Form Manipulation:Among these abilities, form manipulation is noted as not only a standard trait but also one of the most basic. This allows a Death Scythe to change the shape of their Weapon form. However, it can give rise to powerful and useful techniques such as sprouting blades from ones back when grappled, forming climbing claws, changing a blade to serrated, however most of the possibilities are aesthetic.

Death Scythes can now change their Damage Type from Slashing/Piercing to Blunt, and Vice Versa. They can change their Size up or down by one. In Addition, a Death Scythes Previous Partial Form counts as using Death Scythe form for damage purposes, and can be used in a grapple.

Witch Soul Bonus: Death Scythes gain abilities depending on what type of creature their 'Witch' was. Please consult your DM for this.

Characteristics of Death: The previously selected Weapon Characteristic evolves to new heights, it's physical appearance morphing to new limits, as noted on the table below.

Kishin Hunter: Death Scythe gains the weapon ability Bane: Kishin. The Death scythe only has this ability in weapon form or when using a weapon form. They also become immune to all madness abilities of a Kishin except the Frightful Presence.

Death Scythes in the World[edit]

Characters with ranks in Knowledge (Arcana) can research Demon Weapons to learn more about them. When a character makes a skill check, read or paraphrase the following, including information from lower DCs.

Death Scythes in the Game[edit]