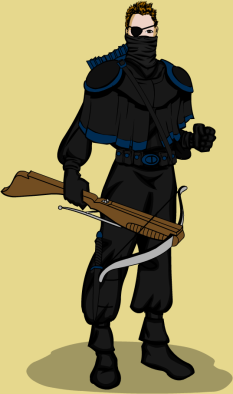 Dead eyes are a far-range combat and expert class.

In combat, the dead eye is a sniper, plain and simple. Out of combat, He is an expert, the eyes and ears, as well as the diplomat of the party. In close range combat, a dead eye is all but useless.

Races: Humans, Drow, and Half-Elves are the most likely to become dead eyes.

All of the following are class features of the dead eye.

Spells: A dead eye cast arcane spells drawn from the dead eye spell list. He does not prepare his spells ahead of time, the way a wizard or cleric must. To cast a spell, a dead eye must have a Charisma score equal to at least 10 + the spell level. The Difficulty Class for a saving throw against a dead eye's spell is 10 + the spell level + the dead eye charisma modifier. Like other spell casters, a dead eye can cast only a certain number of spells of each spell level per day. His base daily spell allotment is given on Table: The Dead Eye. In addition, he receives bonus spells per day if he has a high Charisma score. When Table: The Dead Eye indicates that the dead eye gets 0 spells per day of a given spell level, he gains only the bonus spells he would be entitled to based on his Charisma score for that spell level. Dead Eyes choose their spells from the following list:

Weapon Finesse: At 1st level a dead eye gains Weapon Finesse as a bonus feat. Even if he does not meet the requirements.

Trap finding: At 3rd level a dead eye may locate and disable traps as a rouge does.

Sharp Senses: At 5th level a dead eye gains a +2 competence bonus on listen, search, sense motive and spot checks. this bonus doubles at levels 10, 15, and 20.

Dark Vision (Ex): A dead eye of 13th level and higher has Dark vision of 60 feet. If the dead eye already has dark vision, it increases by 60 feet.

Sharp Senses: At Level 25, and every level after, the dead eye's bonus is equal to his dead eye level.

Death Shot (Su): At 23rd level, a dead eye may study an opponent for 3 successive rounds in order to deal a death shot with a ranged weapon the round after he finished. A creature subject to a death shot is entitled to a fortitude save (DC=10+Dead Eye level) to resist dying. On a successful fortitude save, the death shot acts as a normal attack augmented with Bullseye and Induced Critical. Only creatures susceptible to critical hits may be affected by the death shot; do not treat it as a death effect. The dead eye must not be threatened while studying the target.

Bonus Feats: Jack of All Trades.

Religion: Although Olidammara is the most commonly chosen deity for dead eyes, they are so diverse that many others or, none, are common as well.

Other Classes: Dead Eyes do best in combat whilst hiding behind an ally or two, and out of combat, does best when he can scout ahead alone.

Combat: In combat dead eyes are archers, using melee only as a last resort.

Dead Eyes in the World[edit]

The dead eye fills a niche similar to a rogue or bard; they make good thieves and assassins, and have some healing ability.

Daily Life: The a sizable amount of the dead eyes free time is spent in target practice.

Notables: Duilius (Last name unknown) is renowned for his habit of shooting flies whenever he sees them, no matter how far away it is or how much ammunition he loses in the proses. He always wears at least one eye patch, not always on the same eye, and claims that he does so to hide his eye that was mutilated when he was a child. Both of his eyes are perfectly fine, and the real reason he wears a patch is that he thinks it looks cool.

Organizations: Dead Eyes will often be part of a guild of thieves or assassins, where they can put their skills and talents to use.

NPC Reactions: Like many skilled classes, dead eyes are often (though not always) regarded with suspicion.

Characters with ranks in Knowledge (History) or Knowledge (Local) can research dead eyes to learn more about them. When a character makes a skill check, read or paraphrase the following, including information from lower DCs.

Dead Eyes in the Game[edit]