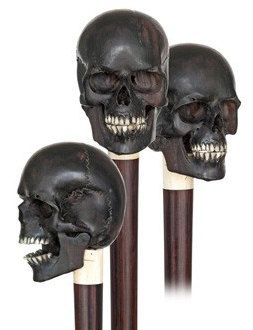 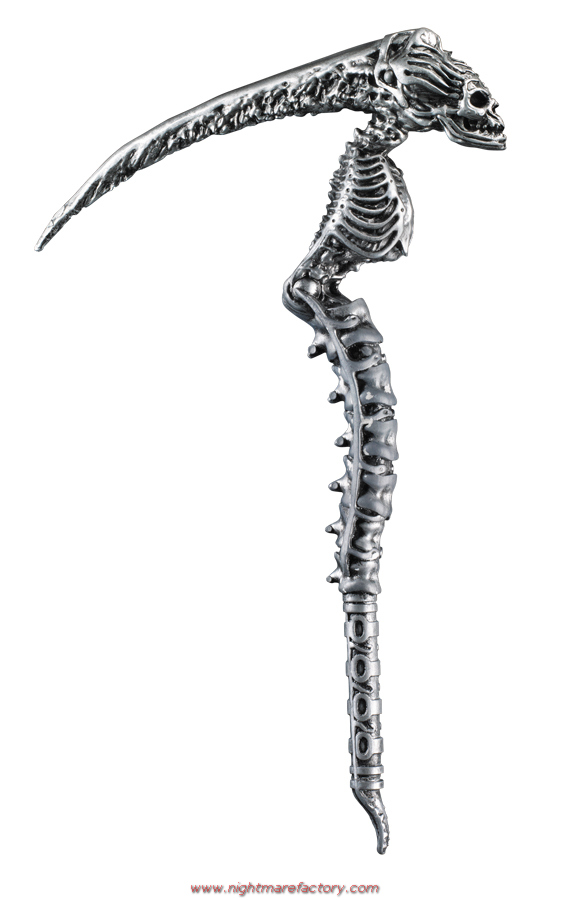 A spiritual weapon crafted in the deepest part of hell for an old man named "Grim", this Rosewood cane has a carved ebony skull head and was bathed in the river styx. Using the concentrated evil energy from the wielder, this cane can change forms, developing a large bloodstained scythe blade and a longer shaft with 5 ruby orbs embedded. A non-evil character holding the scythe or cane incurs 5 negative levels until such time as that it is discarded.

This item imbues it's wielder with the following abilities depending on its current form.

Cane: 3/day as a move equivalent action the wielder may strike the cane against the ground causing all non-allied creatures within 60 feet to hear and feel the bones in their own body grating against each other. Those who fail their Will save (DC 18) are shaken for five minutes and suffer a -10 foot per round penalty to their movement.

The wielder may command the cane to surround him with a swirling shield of bone fragments gaining a +3 deflection bonus to AC. This function lasts a total of one hour per day and may be broken up into any number of periods as long as the total duration does not exceed one hour. Activation is a move equivalent action and deactivation is a free action.

The wielder may use the cane as a focus for Animate Dead to create skeletons. Skeletons created in this fashion constantly sound as if their bones are grinding and grating on each other causing all within 30 feet to become shaken (Will save DC 16 to resist). Those who have failed their save must make another save on the following round or become frightened (Will save DC 18 to resist). Those who fail the second save must make another save the following round or become panicked (Will save DC 20 to resist). Opponents who make their save against becoming shaken, frightened, or panicked are immune to the effect for 24 hours. The wielder is, of course, immune to this effect from skeletons they have created.

The wielder of this cane appears undead to the Detect Undead spell and to all forms of undead.

Scythe: Upon a successful critical hit against a living creature, this +2 unholy scythe slays the target outright, unless it succeeds on a DC 36 Fortitude save.

This enables the wielder to use spell-like effects by expending a certain amount of charges, represented by the ruby orbs, (Max 5). The potential abilities are as follows:

Both: The skull, carved from ebony, is wholly evil. Wherever the weapon goes, the area around it is treated as though an unhallow spell had been cast with the skull as the touched point of origin (except that no additional spell effect is tied or fixed to the weapon).

CANNOT be created, MUST be bestowed by an evil deity.