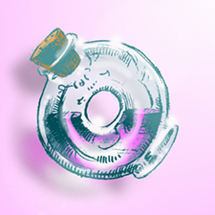 Poison has no flavor and, when seen in it's pure form, is completely clear. It is sold in small vials (approximately one quarter of an ounce). Poison is widely used by assassins and other crafty and sneaky characters. It may be purchased at many black market and back alley shops. The recipe is a widely held secret that is only known by high-level assassins.

Effect: Ten minutes after drinking the poison, the target begins to feel dizzy and finds it hard to breathe. The poison slowly begins to paralyze the body. Every ten minutes another part of the body is paralyzed, starting with the feet, and spreading to the legs, hands, arms, lower abdomen, chest (but not heart), and finally the head and neck. It does not affect the vital systems, though the target will soon die of hit point loss. Every minute after the paralysis begins, the target is inflicted with 1d6 points of nonlethal damage. When the nonlethal damage equals the target's current hit points, they become unconscious and lose 1d6 hit points per minute until death.
Prevention: Poison isn't tremendously strong; it can be cured by three consecutive DC 10 Heal checks (one each for three consecutive minutes).