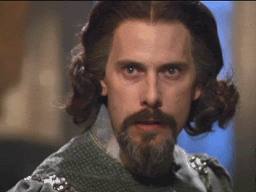 All of the following are class features of the Classic Villain prestige class.

Weapon and Armor Proficiency: Classic Villains gain no weapon proficiency, except for the whip and impromptu weapons.

Using the Condescending Speech ability is as loud as normal speech, but ends in sound as loud as a yell and their is no mistaking the tone even for those whom do not understand the language spoken by the Classic Villain. Using this ability effectively negates future positive diplomacy checks for 24 hours for the target of the attack. A target can make a sense motive DC 15 + Intelligence bonus + level of Classic Villain to understand the pending outcome of the speech. Other abilities that are language dependent are not usable while the villain builds up.

Wicked Ways (Su): A tip of the hat to bad guys everywhere, Wicked Ways make life easier for villains. At 1st level a Classic Villain gains a bonus equal to his Charisma bonus (if any) on all saving throws.

Supreme Arrogance (Su): At 2nd level a Classic Villain gains Supreme Arrogance. Their delusions of grandeur grants them a bonus of +1 plus 1 per two class levels to all rolls and AC. If the Classic Villain is not at full hit points, miss an attack, fail a skill check, or saving throw they must make Will Save DC 25 + 1 for each hit point down or lose the ability for 24 hours.

Evil Genius (Ex): At 3rd level a Classic Villain gains a number genius points per day equal to his Classic Villain level + intelligence bonus. These points are used retroactively to obtain success on rolls. Genius Points are restored once a day after rest.

Rage(Ex): At 9th level a Classic Villain embraces the frustration they have with inferiors, and gain the Greater Rage ability 1/day. This ability stacks with and is identical to the barbarian's ability to rage. During a rage a Classic Villain is unable to use Condescending Speech, Evil Genius, Hostage, Punchy One-liners, or Shocking Revelation abilities.

Classic Villians in the World[edit]

Classic Villians in the Game[edit]