The Chocobo Knights in the past were all Moogles a small race rarely found in the multiverse. Because of their small size it made them ideal riders of the large feathered birds they raised called Chocobos. The secret to raising a chocobo was in the feeding of Gysahl Greens a plant that was at one point only grown by Moogles. The Moogles have since passed on their knowledge to other small races such as Gnomes, Halflings, and what remains of the Moogle race. The Chocobo Knight combines the power of the chocobo along with their magical and martial skills to be a dominate foe to face. Together they are a capable force that even those within their same order fear facing each other in combat. Chocobo Knights are masters of mounted combat and can use most weapons effectively. They are gutsy, some times overly brave, and often are the first in combat the cry of their Chocobos heard loud and clear.

to make a Chocobo knight your character must be of size category small. 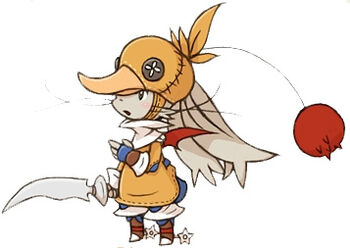 You can make a Chocobo knight quickly by following these suggestions. First, strength should be your highest ability score, followed by wisdom Second, choose the sailor or outlander background. Third, choose glaive or lance.

As a chocobo knight you gain the following class features.

Starting at 1st level, you gain the use of a Chocobo companion. You may summon this companion during a long rest as long as you have access to a Chocobo feather. You can find the statistics for this creature at the end of this class section.

Your Chocobo remains until it either reaches 0 hit points or you summon another one during a long rest. As long as you are mounted on your chocobo you have advantage against being dismounted. Additionally, you can redirect damage that would be dealt to you to your Chocobo.

Additionally at 1st level, you gain expertise in animal handling skill if you do not already know it. If you do know the Animal Handling skill double your proficiency bonus when using the skill instead.

At 2nd level. you adopt a style of fighting as your specialty. Choose one of the following options. You can’t take a Fighting Style option more than once, even if you later get to choose again.

While you are wearing armor, you gain a +1 bonus to AC.

By 2nd level, you have learned to draw on the power of your Chocobo to cast spells. You can prepare a number of spells from the Chocobo knight spell list equal to your wisdom modifier + half your level in Chocobo knight each day. Your spell save dc is 8 + wisdom modifier + proficiency bonus, and your spell attack modifier is proficiency bonus + wisdom modifier. You must use your Chocobo as a spellcasting focus without it you cannot cast spells. Any time you cast a spell that targets only your self you may have that spell also target your Chocobo. If the spell requires concentration damage you or your chocobo take will cause you to make a concentration check.

Beginning at 5th level, you can attack twice, instead of once, whenever you take the Attack action on your turn. The number of attacks increases to three when you reach 14th level in this class.

at 7th level, you can as a bonus action have your Chocobo charge at least 20 ft. toward an enemy in a straight line and deal 1d6 damage and knock the enemy prone unless they make a dc 14 strength saving trow.

at 19th level you can summon an ethereal stampede of Chocobo to knock over any enemies with a 30 ft. radiance around you they must succeed on a dc 14 saving or be knocked prone.

at 10th level, your Chocobo can cast fireball at third level your Chocobo must finish a long rest before it can use this feature again.

at 15th level, your Chocobo can change their attacks damage to fire.

at third level, while mounted you and your Chocobo cannot incur opportunity attacks by moving away from an enemy.

at 10th level, your Chocobo can cast plant growth at third level your Chocobo must finish a long rest before it can use this feature again.

at 15th level, your Chocobo can change their attacks damage to poison.

at 10th level, your Chocobo can cast Fear at third level your Chocobo must finish a long rest before it can use this feature again.

at 15th level, your Chocobo can change their attacks damage to necrotic.

at third level, your Chocobo empowers you, you gain a extra first level spell slot.

at 15th level, your Chocobo can change their attacks damage to lightning.

You know all of the spells on the basic Chocobo knight spell list. 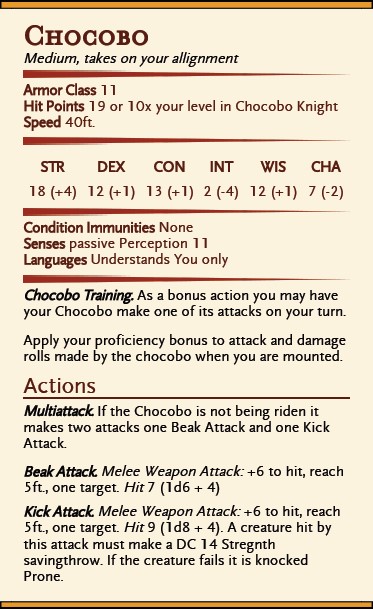 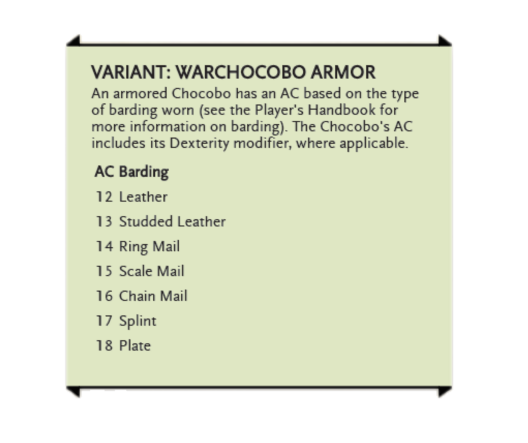 Prerequisites. To qualify for multiclassing into the <!-class name-> class, you must meet these prerequisites: have a Chocobo, and a wisdom of 13 or greater, your character must be of size category small. Proficiencies. When you multiclass into the Chocobo knight class, you gain the following proficiencies: athletics, nature, saddle kit