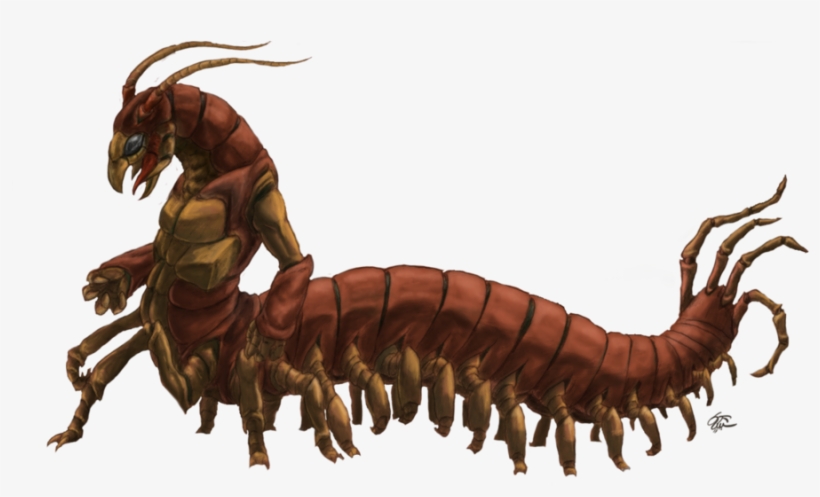 Centipeople have the appearance of a humanoid centipede. All thirty of their legs can be used as either hands or feet, usually using their front legs as arms most of the time. A Centiperson has very poor eyesight and will typically view things with their antennae.

Not only are The Centipeople solitary, they are also very territorial and will fight any of their kind that come near. Being carnivorous, they have to compete for resources and don't see themselves as suited for a hive society. Centipeople will commit cannibalism without question.

Human Centipede
Ability Score Increase. Your Constitution score increases by 2 and your Dexterity score increases by 1.
Age. Centipeople reach maturity approximately 10 years after they are born, evolving from their larvae state into adulthood. They can live up to 600 years before passing.
Alignment. Chaotic Neutral
Size. Centipeople are typically larger than most humans by a small amount. Your size is medium.
Speed. Your base walking and climbing speed is 30ft.
Appendages. You can use your arms to make two bonus actions on your turn. These could include moving, interacting with an object, or making an attack.
Wall Crawl. You can move up, down, and across vertical surfaces and upside down along ceilings while leaving your hands free. Also, you don't suffer a movement speed penalty while crossing difficult terrain.
Mandibles. If a creature is within 5 ft of you, you can use your action to bite them, causing 1d6 piercing damage.
Frightening Appearance. You have disadvantage on all Charisma checks, except for Intimidation. Additionally, you gain proficiency in Intimidation.
Languages. You can speak, read, and write Thri-Kreen, as well as understand common.

When creating a Centiperson, you can use the following table of traits, ideals, bonds and flaws to help flesh out your character. Use these tables in addition to or in place of your background's characteristics.