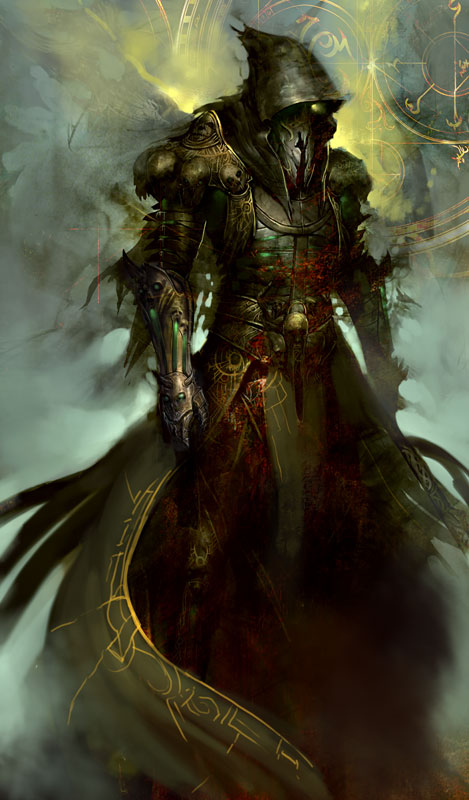 The caustic's body burns with pain, and with power.

The warlock's power stem from pacts that their ancestors made in forgotten times. Warlocks nowadays don't even think of the source of their powerful archaic energies and dark invocations. What happens, however, when these ancient infernal powers decide that they want to end this pact? What are the effects of a of a seizure of power, a power bound to the very blood of the warlock? What happens when these rituals and promises of power are called off? The blood changes. The very blood that the warlock uses to harness their eldritch power corrodes and undergoes a caustic change. It becomes vitriolic, an acid, corroding the very veins of the warlock. This would kill a normal man, but the warlock's granted powers have provided its body with the ability to heal. The body burns, the body wrenches, the body shrieks, but no part of it dissolves. The powers that the elder evils are trying to take back are the very powers keeping the warlocks body from dying, at least for a while, at least until the warlock has given into the pain. These warlocks are called The Caustic, for they will die of the acid, but until they do, they will find a way to use it.

Characters don't pursue this class. No-one pursues banishment by the beings that grant them their powers. This class just happens, to warlocks.

All of the following are class features of the caustic.

Spellcasting: At every level, you gain new invocations per day, an increase to eldritch blast damage and an increase in caster level (and spells known, if applicable) as if you had also gained a level in a spellcasting class to which you belonged before adding the prestige class level. You do not, however, gain any other benefit a character of that class would have gained. If you had more than one invoking class before becoming a caustic, you must decide to which class to add each level for the purpose of determining spells per day, caster level, and spells known.

Caustic Blood (Ex): At 1st level of this class, whenever the caustic is struck by piercing or slashing weapon, that weapon takes acid damage equal to his caustic level, as the acid from his blood dissolves the metal. If the damage is dealt from a natural weapon, the acid damage is instead dealt to the attacker. Every level of caustic grants an increase in Acid Resistance of 2.

Infernal Acid (Ex): When the caustic deals acid damage to a creature with Acid Resistance, that resistance is treated as though it is lower by 2 × levels in this class.

Burning Body (Ex): At 3rd level, the acid coursing through the caustics veins does irreparable damage to his body, though the infernal powers within keep the caustic relatively alive. The caustic loses 2 points of Constitution, to a minimum of 3, Darkvision out to 60 feet, and Immunity to poisons, sleep effects, paralysis, stunning, disease, and death effects.

Thinning Skin (Ex): At 4th level, the caustic's Caustic Blood feature now extends to bludgeoning weapons as well. Whenever the caustic is hit by a melee attack, the attacker takes acid damage equal to half the damage inflicted, if they are within 5 feet of the caustic.

Dissolving Grasp (Su): At 4th level, the caustic can use a full-round action to deal 50 acid damage on a nonmagical object wholly clenched in one fist. Larger items take 1d6 acid damage per caustic level. A caustic may try to damage an enemies weapon or armor by making a successful disarm attempt or touch attack, respectively.

Burning Soul (Ex): At 5th level, the burning of the acid has permanently damaged the caustic's mind, though the infernal power still keeps the heart beating. He know longer feels the pain, he no longer feels anything really, but the burning is ever stained across the caustic's memory. The caustic loses 2 points of Constitution, to a minimum of 3, gains immunity to critical hits, nonlethal damage, ability drain, energy drain, fatigue and exhaustion and ability score damage to Strength and Dexterity.

Superacid (Ex): At 5th level, the caustic's acid becomes so corrosive it can dissolve even the sturdiest of material. Any acid damage dealt by the caustic bypasses all Acid Resistance. His acid become so potent, that it can dissolve barriers made of force as if they were made of magically treated unworked stone.

Vitriolic Eruption (Sp): At 6th level, when the caustic uses his Acidic Embellishment feature, he may use both options at once. Doing so adds an extra two rounds to the cool-down, bringing it up to 1d4+2

Fortitudinous Presence (Ex): At 7th level, the caustic's body become so irreparably damaged, that he can no longer rely on its sturdiness to keep him alive, he must instead rely on his presence and for of influence to keep him a domineering force. The caustic uses his charisma modifier for anything that would normally use his constitution modifier.

Burning Betrayal (Ex): At 7th level, the caustic's body dies, finally taken by the acid. The infernal power however, keeps the caustic aware and alive inside of it. The Caustic becomes undead, and gains the undead subtype. The caustic drops all his hit dice and replaces them with d12s.

Combat: The caustic plays the same roll in combat as his warlock counterpart. He does however, gain improved abilities in the realm of acid. The ability to dissolve weapons and armor renders a lot martial character vulnerable to you. The ability to dissolve force effects is rare and is sure to have it uses. If something needs to be melted, or blasted, or generally all messed up, the caustic is there to do it.

Advancement: Unfortunately, the lack in other warlock prestige classes make advancement limited for a caustic. However, the transcension to undeath opens up a plethora of feat and prestige class options that would not have been available to warlocks otherwise.

Resources: Caustics are generally shunned by other warlocks, which is saying something since warlocks are shunned themselves. Other caustics may empathize and help each other, but the caustic may be saddened to find that only his adventuring party is willing to help him out.

Caustics are rare in the world, but where they appear they are usually hunted and shunned. The slow transition to undead makes caustics an abomination to most people. One is most likely to find caustics where they would find warlocks, only much rarer. The more vile caustics have found in graveyards as Liches, amassing undead armies and wreaking havoc. The neutral caustics are just trying to get by, and can be found where warlock would be in any adventuring party.

NPC Reactions: NPCs retract in disgust and fear at the sight of caustics, the degradation of there body and pale undead appearance leads to many terrible stories. Mostly, NPCs will react the same way they would to warlocks, with skepticism and fear, but to a more extreme degree.

Characters with ranks in Knowledge (arcana) can research caustics to learn more about them. When a character makes a skill check, read or paraphrase the following, including information from lower DCs.

Caustics in the Game[edit]