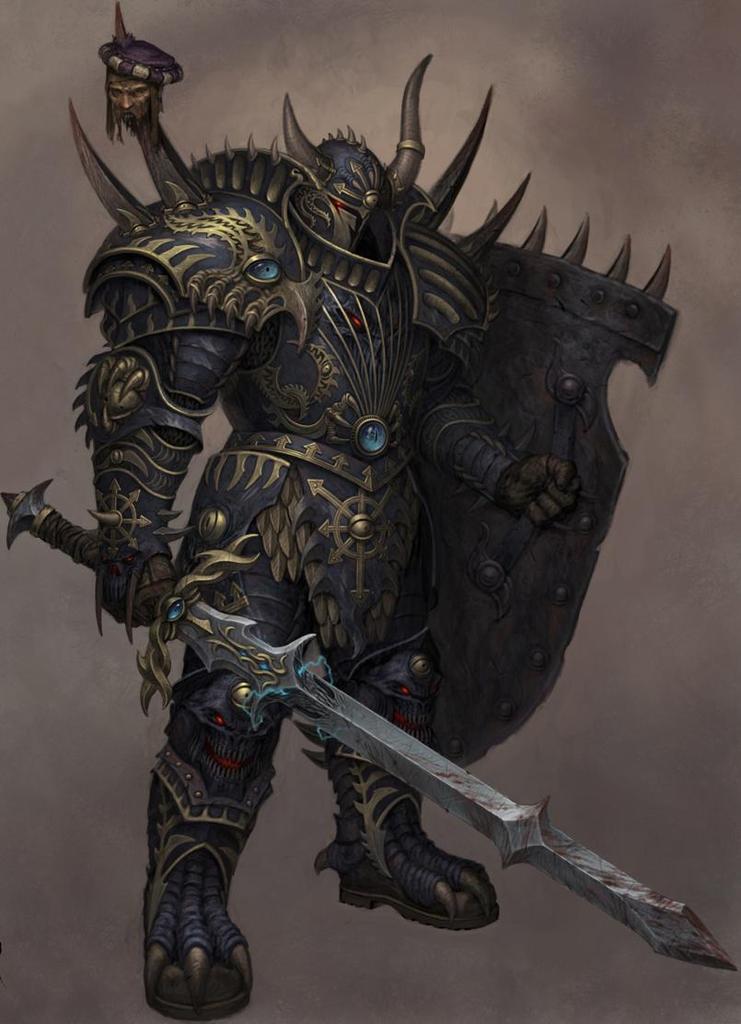 An armored soldier who protects his companions with a variety of boon-giving auras.

Abilities: Guardians spend their time defending others in the party, so a high CON is key. Having a high STR will aid in fending off the enemies that are on the assault.

Alignment: Any Good, or Neutral

All of the following are class features of the Guardian.

Weapon and Armor Proficiency: A guardian is proficient with all simple and martial weapons and with all armor (heavy, medium, and light) and shields (including tower shields).

Guardian Aura (Ex): A guardian can choose one of many auras that affect all allies within 30ft. Only one aura can be active at a time. It takes a standard action to activate the aura. The Guardian may use only auras that are of the same or lower level than his total levels in Guardian. This is a constant effect that lasts until the guardian dies.

Defender’s Strike (Lv1): Allies gain +1 to their Base Attack Bonus equal to the aura’s bonus.

Elemental Defense (Lv5): Allies gain resistance 2 to the energy type of your choice per bonus of the aura.

Travelers Cloak (Lv10): Allies effected by this aura gain 3 points of resistance to heat and cold (including spells).

Protector’s Courage (Lv10): Allies gain a +2 morale bonus on saving throws against fear effects for each point of the Guardians Aura bonus. If an ally fails a saving throw against any fear effect he may roll the dice a second time, taking the higher of the two rolls, the ally only gains half the morale bonus (rounded up) on the second dice roll.

Travelers Speed (Lv15): Allies in range of this aura double their normal base land speed while under the effect of this aura. This aura may be used 1 hour per day per point of aura bonus. If at any time during the use of this aura any ally under its effect makes an aggressive action against anything (including inanimate objects) this aura's effects ends and may not be used again for 24 hours.

Swift Aura: At 3rd level the guardian has learned to invoke his auras faster, he may choose to change or create an aura as a move action.

Stable Aura: Stable aura allows a Guardian to cause his aura to radiate from a special gem that he must create himself. To use this ability the guardian must first activate an aura while holding the gem. He may transfer the Aura to the gem as a move action at this point the gem radiates the aura instead of the Guardian. So long as the gem is active and the Guardian is with in it range he considered to be using 1 aura. At any time the Guardian may use a move action to to destroy the gem with a thought range, line of sight, and even being on a different plane do not effect this ability. This stops the aura and allows the guardian to begin using auras as normal. To create a gem the Guardian must choose any gemstone of at least 50gp value and then spend 2 hours meditating with the gem in hand. A Guardian may only create one such gem per week and the gem works only for him not any other guardians. There is no time limit on how long a gem may remain active or on how many gems a guardian may own. A guardian may activate any special abilities that effect auras through the gem so long as he is within the aura that it creates. A guardian does not gain any benefits of the aura that the gem is radiating. Once the gem is in place if it is moved the aura stops and the gem is destroyed. Only the Guardian may touch the gem, anyone or anything else just passes through the gem as though they where trying to touch a ghost. The gem may only be effected by someone other than the guardian by using a wish or ghost touch,in which case the gem is destroyed.

Extend Aura: A Guardian's Aura now extends to 50ft. He may use an Aura Bonus to extend his Aura even further, an additional 20ft per Aura Bonus.

Aura Bonus: At First level a guardian gains a +1 bonus to his Aura's. This increases by +1 every odd thereafter, so it becomes +2 at 3rd level, +3 at 5th level and so on.

Special Mount (Sp): Upon reaching 5th level, a guardian gains the service of an unusually intelligent, strong, and loyal steed to serve him in his mission. This mount is usually a heavy warhorse (for a Medium guardian) or a warpony (for a Small guardian). However, guardians may choose other mounts with the approval of the GM.

Once per day, as a full-round action, a guardian may magically call his mount from the celestial realms in which it resides. This ability is the equivalent of a spell of a level equal to one-third the guardian’s level. The mount immediately appears adjacent to the guardian and remains for 2 hours per guardian level; it may be dismissed at any time as a free action. The mount is the same creature each time it is summoned, though the guardian may release a particular mount from service.

Each time the mount is called, it appears in full health, regardless of any damage it may have taken previously. The mount also appears wearing or carrying any gear it had when it was last dismissed. Calling a mount is a conjuration (calling) effect.

Should the guardian’s mount die, it immediately disappears, leaving behind any equipment it was carrying. The guardian may not summon another mount for three days or until he gains a guardian level, whichever comes first, even if the mount is somehow returned from the dead. During this three-day period, the guardian takes a –1 penalty on attack and weapon damage rolls.

Aura Augmentation (Sp): At level 13, A Guardian is able to add his Con Modifier to his Aura Bonus as an instant action. Usable three times a day, lasts rounds equal to half of your class levels in Aura Guardian.

Negative Aura (Sp): At level 15, A Guardian may reverse his Aura, making any enemy within range take the opposite of his bonus.

Aura Burst (Sp): At level 17, A Guardian may release a burst of energy, as a swift action, dealing 3d10 to any enemy within his Aura. Usable equal to half of your class levels in Aura Guardian per day.

Force To Be Reckoned (Sp): A Guardian has grown immensely more skilled. He may use two different Aura's at the same time.

When a guardian becomes that of another Alignment that he starts out picking, he looses his Guardian Aura and Special Mount. He cannot thereafter gain levels as a guardian until he atones (see the atonement spell description, page 201, PHB 3.5)

Bonus Feat The epic guardian gains a bonus feat (selected from the list of epic fighter bonus feats) every two levels after 20th.