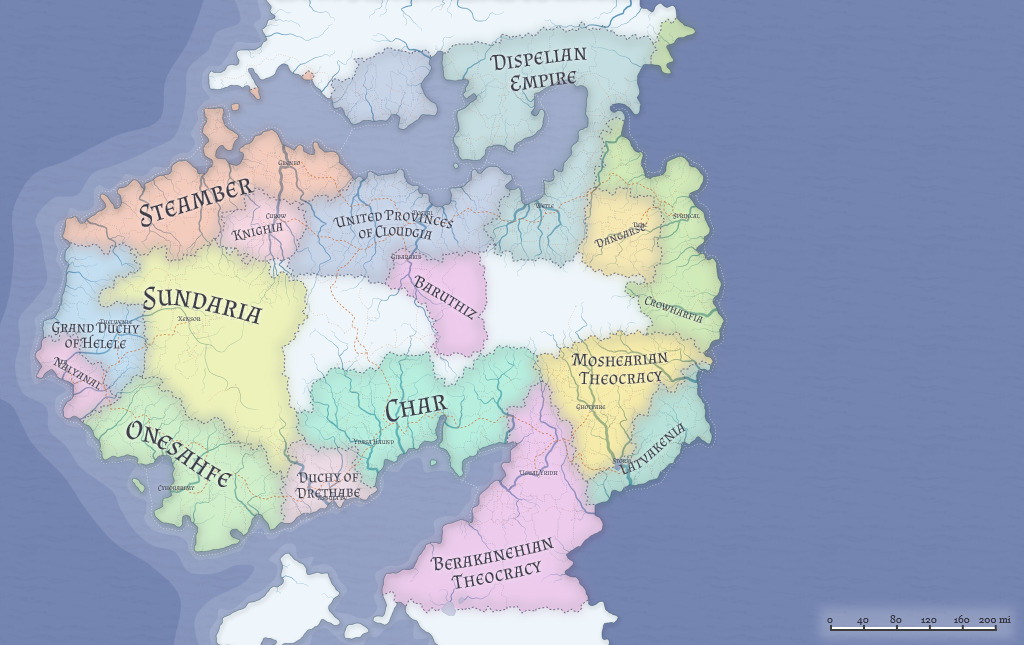 Ataresia is a large and complicated world, filled to the brim with magic and warring factions alike. In the centre of the continent is a large piece of land unclaimed by any state. It was agreed upon long ago that these lands could not and would not be claimed by any state that claims land on the continent of Ataresia. This land is filled with free roaming groups of every race, many of whom are perfectly willing to have relations with outsiders. Beyond that, these unclaimed lands are also a place of war. Many battles have been fought in these lands, since they border the majority of Ataresian states.

The years in Ataresia are measured based on the years since the famed wizard Sigel discovered the Outlands and founded the City of Doors. Currently, the year is 12,020. An Ataresian year has 13 months of 30 days. Timekeeping in each month can be split into three tendays - each having 10 days, two fortnights - each having 15 days, and 6 fivedays - each having 5 days. Each day is named according to its relation to the tendays (ie. the fifth day of the third tenday).

Races
Where the races of D&D live in Ataresia, and how they interact to form Ataresia's politics and intercultural experiences.

Weapons
New weapons used by militants and monks in Ataresia, as well as variant rules for pre-existing weapons.

Ataresian Pantheon
The pantheon of dieties in Ataresia and basic information about them.

Geography
A detailed description of Ataresia's map and all the states within it.

History
Ataresia's nations, how their governments run, and the historical events that defined them.

Magical Items
The various magical items unique to Ataresia (but they can be used in other campaigns, of course.)