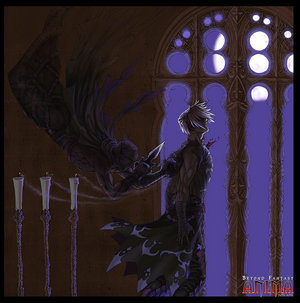 Assassins do it from behind.

An assassin is a master of the art of killing, a vicious weapon honed by experience and inclination to learn the myriad ways to end a life. Unlike common warriors or rogues, an Assassin does not study various fighting arts or muddle his training with martial dirty tricks, he instead studies the anatomy of the various creatures of wildly different anatomies and forms of existence, and he uses this knowledge to place his blows in areas vital for biological or mystical reasons. Stealth and sudden violence are his hallmarks, and various exotic tools and killing methods become his tools.

While most societies consider assassination to be a vile art, or at best a dishonorable or unvalorous one, the reasons that drive these killers vary. Cold-hearted mercenaries share a skill set with dedicated demon-hunters, differing only in the application of their skills. Only the most naïve student of ethics believes that all killing is evil, or that nobility cannot be found in a mercifully quick death.

The most obvious strength of the Assassin is their ability to hand out incredible amounts of damage. BUT. They may only use Death Attack, at most, every other round and their Medium BAB makes it a little uncertain about whether or not the attack will hit. Their spellcasting can be very useful and interesting--Color Spray is a good spell to have at very low levels, because it can remove an enemy from a fight in one action. The various Image illusion spells can be put to creative use, and Invisibility and Greater Invisibility can be used to let the Assassin get a Death Attack off every other round.

Your ability to choose a free exotic weapon is very handy, so you might look up a weapon such as an elven thinblade or something else finessable to allow you to get maximum use out of a high dexterity.

All of the following are class features of the Assassin.

Spellcasting: The Assassin is an Arcane Spellcaster with the same spells per day and spells known progression as a Bard, except that he gains no more than three spell slots per level. An Assassin’s spells known may be chosen from the Sorcerer/Wizard list, and must be from the schools of Divination, Illusion, or Necromancy. To cast an Assassin spell, she must have an Intelligence at least equal to 10 + the Spell level. The DC of the Assassin's spells is Intelligence based and the bonus spells are Intelligence based.

Poison Use (Ex): An Assassin may prepare, apply, and use poison without any chance of poisoning herself.

Death Attack (Ex): An Assassin may spend a full-round action to study an opponent who would be denied their Dexterity bonus if she instead attacked that target. If she does so, her next attack is a Death Attack if she makes it within 1 round. A Death Attack inflicts a number of extra dice of damage equal to her Assassin level plus two dice, but only if the target is denied its Dexterity Bonus to AC against that attack. Special attacks such as a coup de grace may be a Death Attack. Assassins are well trained in eliminating magical or distant opponents, and do not have to meet the stringent requirements of a sneak attack, though if a character has both sneak attack and death attack, they stack if the character meets the requirements of both. As long as the victim is denied their dexterity against attacks from the assassin during the study action and the attack itself, it counts as a death attack. An Assassin may load a crossbow simultaneously with his action to study his target if he has a Base Attack Bonus of +1 or more.

Uncanny Dodge (Ex): Starting at 2nd level, an Assassin can react to danger before his senses would normally allow him to do so. He retains her Dexterity bonus to AC (if any) even if she is caught flat-footed or struck by an invisible attacker. However, he still loses her Dexterity bonus to AC if immobilized. If an Assassin already has uncanny dodge from a different class he automatically gains improved uncanny dodge (see below) instead.

Hide in Plain Sight (Ex): A 3rd level Assassin can hide in unusual locations, and may hide in areas without cover or concealment without penalty. An Assassin may even hide while being observed. This ability does not remove the -10 penalty for moving at full speed, or the -20 penalty for running or fighting.

Cloak of Discretion (Su): At 4th level, an Assassin is protected by a constant Nondetection effect, with a caster level equal to his character level.

Trapmaking (Ex): At 5th level, the Assassin learns to build simple mechanical traps in out of common materials. As long as has access to ropes, flexible material like green wood, and weapon-grade materials like sharpened wooden sticks or steel weapons, he can build an improvised trap in 10 minutes. He can build any non-magical trap on the “CR 1” trap list that doesn’t involve a pit. These traps have a Search DC equal to 20 + the Assassin’s level, have a BAB equal to his own, and are always single-use traps. He may add poison to these traps, if he has access to it, but it will dry out in an hour.

Full Death Attack (Ex): At 7th level, if the Assassin studies an opponent to perform a Death Attack, she can make a full attack during the next round where every attack inflicts Death Attack damage as long as the target was denied their Dexterity bonus to AC against the first attack in the full attack action.

Palm Weapon (Ex): At 6th level, the Assassin learns to conceal weapons with supernatural skill. Any weapon successfully concealed with Sleight of Hand cannot be found with divination magic.

Nerve of the Killer (Su): At 8th level, an Assassin gains a limited immunity to compulsion and charm effects. While studying a target for a Death Attack, and for one round afterward, he counts as if he were within a protection from evil effect. This does not confer a deflection bonus to AC.

Skill Mastery (Ex): At 10th level, an Assassin becomes so certain in the use of certain skills that she can use them reliably even under adverse conditions. When making a skill check with Climb, Disable Device, Hide, Move Silently, Search, Spellcraft, Use Magic Device, Use Rope, or Swim, she may take 10 even if stress and distractions would normally prevent her from doing so.

Poisonmaster (Ex): At 11th level, the Assassin learns alchemic secrets for creating short-term poisons. By expending an entire healer’s kit worth of materials and an hour of time, he can synthesize one dose of any poison in the DMG. This poison degrades to uselessness in one week.

Exotic Method: At 13th, 16th, and 19th level the Assassin learns an exotic form of killing from the list below. Once chosen, this ability does not change:

Killer’s Proof (Su): At 15th level, the Assassin learns to steal the souls of those he kills. If he is holding an onyx worth at least 100 GP when he kills an enemy, he may place their soul within the gem as if he has cast soul bind on them at the moment of their death.

Death by a Thousand Cuts (Ex): At 17th level, the assassin has learned to kill even the hardiest of foes by reducing their physical form to shambles. Every successful Death Attack inflicts a cumulative -2 Dexterity penalty to the Assassin’s victim. These penalties last one day.

Mind Blank (Su): At 18th level, the Assassin is protected by a constant mind blank effect.