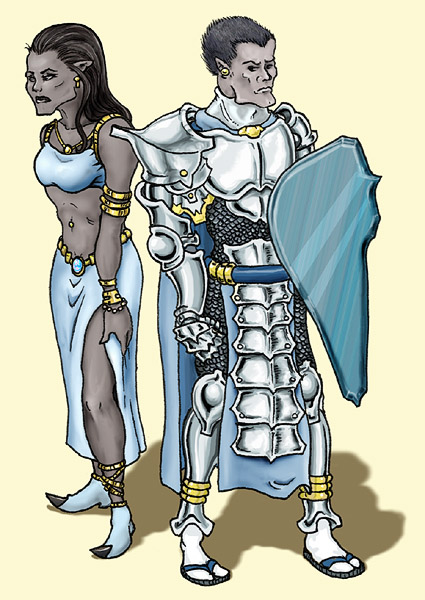 Aroghin are outsiders, not caring to look in on the world around them. They are often too concerned with matters within their own land to bother dealing with the other common races.

Aroghin tend to be reserved in social situations and willing to take orders well, with a never-give-up attitude and a noble demeanor that can turn just as ugly as any situation they find themselves caught in. Aroghin tend to be proud if born into a high class of society. Though, due to schooling, they tend to see some of the other races as beneath them, especially humans and malaquians. When not showing pride for their heritage, they have a lean toward depression and introspection. Often, they display wild mood swings over things that seem slight.

Aroghin are tall for being related to humans, ranging from 5’6’’ to 7’ tall, tending toward the latter. They have strong, chiseled features with smooth, gray skin, ranging from darker to lighter in tint. Their straight hair comes in a variety of human tones, but is more subdued, as are their eyes. Dull Brown, Dark Gray, Slate, Sand and Rust are all common colors of hair and eyes. Taller aroghin appear like stretched humans, being thinner than humans of the same height, but more muscular. As in humans, their women tend to be shorter and softer in appearance. Strangely, black hair is much more common among women than men. They live as long as humans, though aroghin women tend to live longer.

Aroghin do not get along well with other races, though this is mainly due to their long history, as aroghin hold a racial grudge against humans and their close kin. Oddly, the farther away a race is from being humans, the less they typically care about it. Small races are of little concern, and monstrous humanoids are likely to form alliances with the aroghin against humans. Though, aroghin will tend to view these other races as beneath them, they have no problem using another race's brute force.

Aroghin society, in its decay, forces a nature of selfishness upon its people. This creates a slight neutral evil bend in their population, but depending on their position in the social structure, and general life outlook, an aroghin may be of any alignment.

Aroghin live in Monarchies, with a ruling King or Queen that can rule for centuries, as aroghin royalty hold secret and ancient cursed magic to prolong strength and life. This King rules as a Living God, decreeing law as need be and taking whatever suits his desires from his people. Citizens do not worship the King, but are expected to show loyalty without question, lest they be cruelly punished.

Aroghin society is split into definite classes, with the warrior priests at the top, then the nobles, working class, and granlings at the bottom, who often feel the lash of their masters. Their cities are built to reflect this, with the finest and strongest buildings in the center and walls to separate the classes as they radiate from a central palace where their ruler dwells. The outer most rings of buildings are often poorly kept and rotting as if the soul of the city itself is dying.

An aroghin may personally worship any God he wishes. Though, Gods that ferry the dead into the afterlife are most common, as death and dying are important to aroghin culture. However, it is the city's God King that is truly the center of praise in any aroghin land. While it is not necessary to lay offerings or heavy taxes to the God King, he does demand utter obedience and absolute devotion from his people. For this, the God King is gladly worshiped as he delivers peace and protection to his people. However, due to the curses of the magic placed upon him, the God King endures the memories of old pains. He does not sleep or tire.

As aroghin are isolated, they only speak Aroghin. Well learned and studied aroghin are more likely to pick up languages other than Common first. Common is often viewed as crude and simplistic, so most aroghin avoid learning it on cultural principle.

Their language is both harsh and fluid. Simple conversation is often rough and gutteral, but whispers are smooth and silky. Their language is quite complex, containing many duplicate-meaning words for different situations. The different words used are also a clue as to how the aroghin wishes to be perceived by his fellows. If he wishes to appear strong, he will use the harsh words, but if he wishes to appear intelligent and wise, he will use the fluid words.

Aroghin names tend to use bold syllables to reflect strength, and calm syllables to reflect wisdom and strong character. They introduce themselves with their surname (family name) first, followed by their true name. As long as no two members of a family are present, it is socially acceptable to call an aroghin by his surname. Most aroghin prefer to be called by their full name when appropriate. Aroghin have been known to change their names after dramatic life experiences, though most simply choose a title that fits appropriately for formal introductions. Names given in parentheses are how non-aroghin commonly pronounces their names. As general rules, when spelling aroghin names, a is followed by h, ck is que, and a g in a male name is doubled.