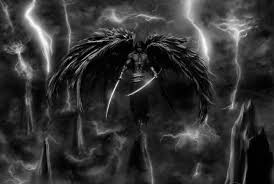 Arioch is the bastard child of the deity Hextor and a paragon erinyes, named Oriet. He once served as Mephistopheles's chief battle commander. He lost his position in Cania was was cast out of Hell after he attacked Hextor, when the deity of Tyranny paid a visit to Mephistar. The battle between the two nearly leveled the city and Mephistopheles was only just able to force the beserk General and a few of his sworn swords through a portal, forever banishing Arioch from Hell. Arioch and his minions appeared on the Mittelhelm in the year 362 and has been scheming his revenge ever since. Arioch wants to rebuild the acient artifact known as the Mythallar, which was similtaneously destroyed on the worlds of Toril and the Mittelhelm by a newly born divine power, named Mystra (she is called Chimmerin on the Mittelhelm). The Mythallar is a rather infamous and widely misunderstood artifact engine which produces magical items without any kind of personal investment. When the mythallars constructed simultaneauously by the netheril and the men of the Mittelhelm they affected the entirity of the Great Wheel and damn near spoiled it for everyone. Mystra outlawed the mythallars forever and if it were ever rebuilt, it would have proved the impossible possible; therefore undoing all of creation and destroy everyone and sending Arioch back to Hell, which is 'zactly what this cutter wants.

Arioch and his minions walk the mortal world world in many guises and within the last century have infiltrated nearly every culture and civilization on the Mittelhelm as they search for clues to the locations of the lost pieces of the Mythallar.

Arioch is a powerfully built, winged, four armed humanoid, standing 11'6" with silvery gray skin covered in tiny scales. His eyes are a horrific yellow and his countenance is distinctly draconic. He typically wears a sleeveless long coat of deep blue leather and dull gray iron scale mail and four over-sized, obviously magical spiked gauntlets which are his favored weapons.

This Entry is currently incomplete[edit]

His Skills and Feats need to be added... I've typed enough for one day

Mayhaps this needs a little clean up.I believe this version of Arioch was created with 3.0. Arioch as he appears here is not how he appears in the 9fires RPG, this version was concocted when a friend and I challenged each other to see how insane we could get with the Epic Level Handbook. Arioch won the fight and he has just never left.